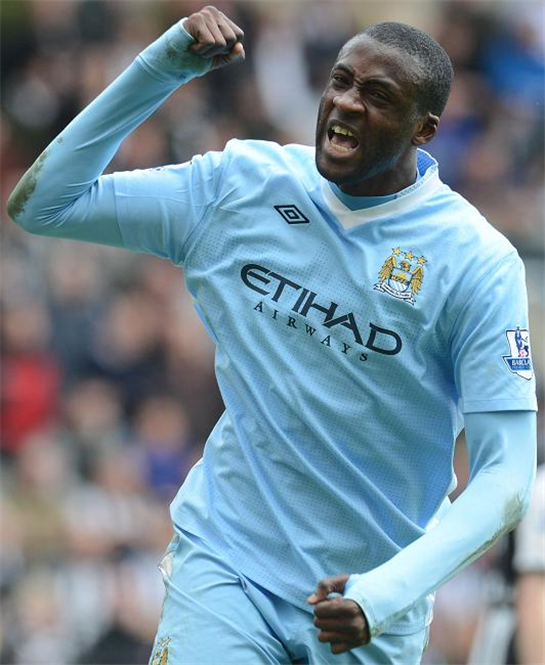 WITH the English Premier League title slipping away, Manchester City’s Yaya Toure cannot return quickly enough from the African Cup of Nations to lift the stumbling champions.
City hasn’t won any of its last five matches in all competitions, the club’s worst run since the final days of Mark Hughes’ reign in 2009.
Surely, it’s no coincidence that this latest winless streak has coincided with Toure’s recent absence.
The team’s driving force in midfield, he has been sorely missed while away on international duty with Ivory Coast at the African Cup.
Mercifully, for City, Toure is on his way back from the tournament — he captained the Ivorians to a first continental title in 23 years on Sunday — but probably too late to be involved in Wednesday’s league game at Stoke, which second-place City starts seven points adrift of leader Chelsea.
“We can’t really afford too many more slip-ups, if any,” said midfielder James Milner, who scored with an injury-time free kick to earn City a disappointing 1-1 home draw with Hull on Saturday.
“We know, more than anyone, you have to keep going to the death and anything can happen, but I think we have got to be pretty faultless between now and the end of the season to get close.”
City’s decline has allowed the chasing pack to close the gap.
Southampton is only four points back in third with Manchester United a further point adrift in fourth.
Hughes is now the manager of Stoke and will relish an opportunity to pile misery on his former club. Many observers feel he was fired unfairly by City more than five years ago.
Stoke is traditionally a tough place to win three points and, with Chelsea at home to out-of-form Everton, there’s a good chance the London club’s lead can be extended Wednesday in the 25th round of fixtures.
Here are some other things to look out for in the midweek round of games:
MAN UNITED’S PLAN B
With his expensively assembled forward line misfiring, Man United manager Louis van Gaal is finding attacking solutions in his Plan B from the substitutes’ bench — Marouane Fellaini.
Fellaini’s height and presence has offered United a different kind of threat late in games. He came on to score United’s opener in a 2-0 win at Queens Park Rangers two weeks ago and his second-half arrival Sunday changed the game at West Ham where Daley Blind scored an injury-time equalizer in a 1-1 draw.Advertisement

“We couldn’t cope with the long balls Manchester United kept putting in the box (toward Fellaini),” West Ham manager Sam Allardyce said. “It was just ‘thump it forward’ and see what they could get.”
Fellaini is likely to be on the bench again when United hosts Burnley on Wednesday.
LIVERPOOL’S CONCERNS
Liverpool could be without three players who have been instrumental in the team’s recent revival for Tuesday’s match against Tottenham, which is a key fixture in the fight for Champions League qualification.
Holding midfielder Lucas Leiva and forwards Raheem Sterling and Philippe Coutinho were all hurt during a 0-0 draw at Everton Saturday and are doubts, according to Liverpool manager Brendan Rodgers.
It may persuade Rodgers to give a first start to Daniel Sturridge since the striker’s return from five months out injured. Sturridge has come on as a substitute in Liverpool’s last three games.
A win for Liverpool would move it a point behind fifth-place Tottenham.
PARDEW, NEWCASTLE REUNITED
Six weeks after leaving Newcastle following four turbulent years at St. James’ Park, Alan Pardew will take on his former club for the first time as Crystal Palace manager on Wednesday.
Pardew has won five of his six matches since joining Palace in early January, a run of form that has lifted the club away from relegation trouble.
PEARSON’S LAST GAME?
Leicester has rejected widespread reports in the British media that its manager, Nigel Pearson, will be fired, with the team in last place and on a run of three straight losses.
The pressure is on Pearson, though, and a trip to Arsenal on Tuesday is hardly the kind of fixture Leicester needs in its situation — especially as Arsenal’s star forward, Alexis Sanchez, is available again after injury.
Pearson came under scrutiny during a 1-0 loss to Crystal Palace Saturday when he placed his hands round the neck of Palace midfielder James McArthur, after the player slid off the pitch into the technical area.
Also Wednesday, it’s: Southampton vs. West Ham and West Bromwich vs. Swansea. On Tuesday, it’s: Hull vs. Aston Villa and Sunderland vs. Queens Park Rangers.