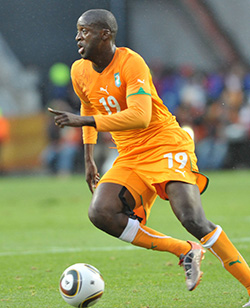 IVORY Coast begins the defence of its African title this weekend without Yaya Toure after the team captain asked not to be selected while he considers his international future.
So, Sunday’s 2017 African Cup of Nations qualifier against Sierra Leone in neutral Nigeria is the start of new coach Michel Dussuyer’s reign, and possibly the start of life for the Ivorians without Toure.
Nigeria also has a new coach as former player Sunday Oliseh takes charge against Tanzania.
Ghana, after a 7-1 win over Mauritius in the first round, travels to Rwanda. Unimpressive in a scrambling 1-0 victory over Mauritania in its first group qualifier, Cameroon is away at Gambia.
Ivory Coast is starting its campaign late after playing its first game against 2017 tournament host Gabon, which has been included in the qualifying competition but whose games don’t count toward the group standings.
Dussuyer took over from the 2015 African Cup-winning coach Herve Renard and spent his first few months in the job gauging whether the 32-year-old Toure will continue.
Dussuyer recently flew to London for talks with the Manchester City midfielder, who is still to decide if he wants to keep playing for his country.
The French coach also has problems with other stars. Striker Wilfried Bony is injured, while Newcastle midfielder Cheick Tiote is not part of this squad after team management couldn’t contact him.
The game was moved to Port Harcourt in southern Nigeria because of the lingering effect of the Ebola outbreak in Sierra Leone.
It was initially scheduled for Lagos, but Sierra Leone made a late change, forcing the Ivorians to alter their plans and take a chartered plane down to the Niger Delta.