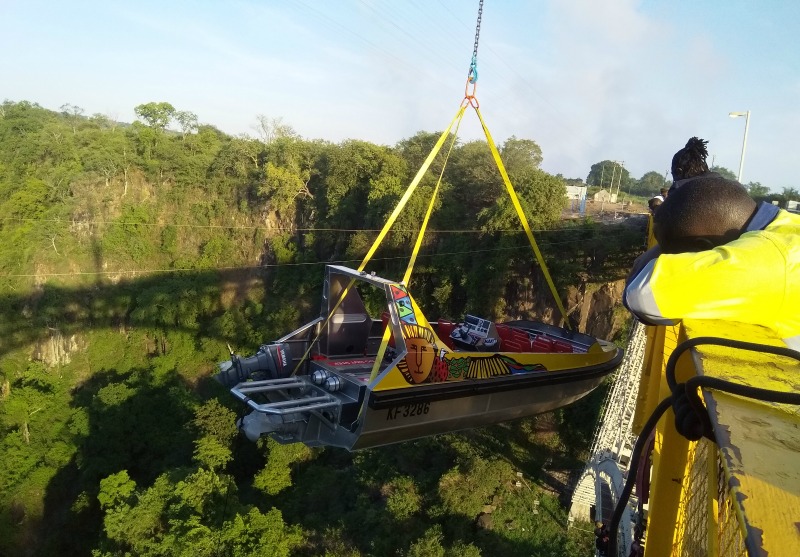 Shearwater Adventures Group has added a high adrenaline activity to Victoria Falls’ amusement scene with the launch of a jet boat on the Zambezi River.

This comes at a time the resort town was enjoying renewed interest from the international market.

A jet boat is a boat propelled by a jet engine fitted to its back and is a type of cruise that sails downstream on the rapids and fast flowing water underneath the Victoria Falls Bridge.

After cracking heads over a jet boat that disappeared more than a decade ago while docking at night on the river bank, the country’s leading tour operator has come up with an aluminum 14-seater boat propelled by a 435 Volvo engine fitted with an auxiliary motor for back-up.

It uses 80 litres of diesel per hour and that together with its net mass of close to three tonnes, makes it heavy enough to oppose the current when sailing upstream, Shearwater engineers said.

The boat was made in Cape Town at a cost of half a million dollars. It was launched Saturday morning when it was lowered down the bridge by a crane.

He said clients will be assured of safety.

“It will operate below the bridge from the boiling pot from rapid 1 to 4 adding to adrenalin rushing activities in Victoria Falls.

“The boat will go through a rigorous testing and safety process for two weeks to ensure it’s safe for clients. We have done as much as we can to make sure it’s designed well and we are confident it’s going to work this time.

Fowler said it took eight months to make the actual boat while the whole process of designing it took two years as the company sought to ensure safety.

Clients will pay around US$100 for a single trip which will for between 30 and 45 minutes.

Just like rafting, jet boat sailing will be determined by water level.

Other high adrenalin activities on the Zambezi River include bungee jumping, gorge swing and rafting.