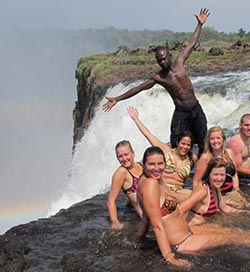 TOURISM workers and employers have agreed to a two percent salary increment across the board for 2015, which will see the lowest earner being paid $105 per month before allowances, an industry official has said.
Clement Mukwasi, president of the Employers’ Association of Tourism and Safari Operators who is also an executive of the Shearwater Adventures group, confirmed the deal which he said was reached last month.
“We agreed on a salary increment of two percent with effect from March this year to February 2016. Under the deal, the lowest paid workers in the sector one will get $105 while in sector two they will get $240,” said Mukwasi.
The tourism sector is divided into two sections – Sector 1 for mainly hotel and lodge employees and Sector 2 for mostly those in conservation, safari and wildlife operations.
Mukwasi said employers had argued for no increments because the industry was not making any profit due to a 15 percent VAT levy introduced on foreign tourists by government last year.
Workers asked for a five percent increment but accepted an offer of two percent. The salaries do not include allowances and other packages.
Last year, the industry agreed to a salary increment of 5.5 percent for the high earning employees and 45.5 percent for the lowest paid workforce.
The tourism sector is Zimbabwe’s third highest foreign currency earner after mining and agriculture, earning $851 million in 2013 but is among the lowest paying industries.Advertisement