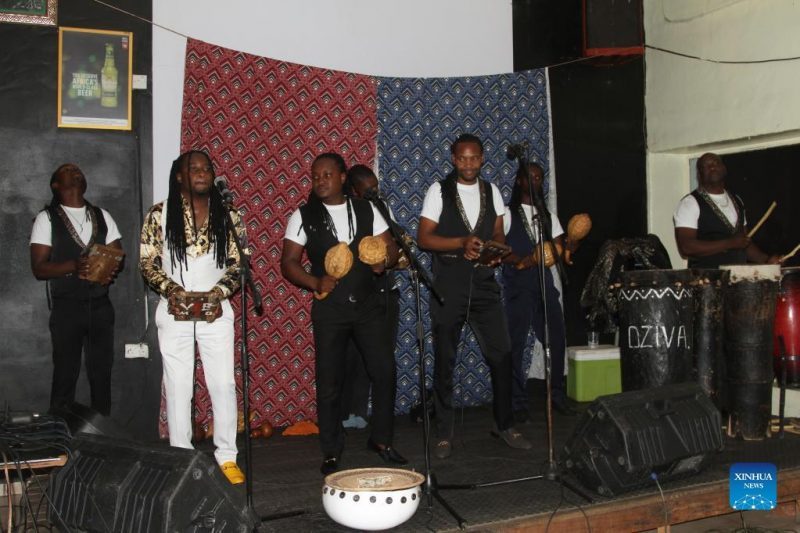 IN ONE of the guest rooms, Virimai Nhedega, a traditional Zimbabwean music player, sniffed a brownish substance known as “bute” in preparation for a performance, one of few events he held this year due to pandemic restrictions.

“I feel so happy because it’s been a while since we last met audiences,” Nhedega told Xinhua. “The virtual shows that we have been doing do not have the same punch as live shows.”

“Observing how audiences are reacting gives you energy when you are performing on stage,” he added.

Nhedega, who is passionately known as Vee Mhofu, is an avid player of mbira, a traditional Zimbabwean musical instrument made of a handheld hardwood soundboard and has a series of thin metal keys affixed to its surface.

Together with his six-member musical group named Dziva Rembira, Nhedega is aiming to put Zimbabwean traditional music on the international stage.

The musical group’s traditional harmonies are often mixed with other modern genres, giving them authentic traditional Zimbabwean music with a modern feel.

Traditional African drums are also included in their performances, and the synchronized rhythm of mbira and the drums creates a euphonious effect to the ears of the listener.

The powerful rattling sounds of hosho, a traditional percussion instrument made of dried gourds filled with seeds, also add a vibrant and dense sound quality to the mbira and drums.

On the stage, a group of immaculately dressed men performed traditional songs, leaving the spectators in awe with their mellifluous tunes and energetic dances.

A sizable number of spectators attentively followed the proceedings, with some regularly sniffing “bute” snuff.

In ancient times, “bute” played an important role in spiritual healing among the Shona people who constitute the majority of the Zimbabwean population, as it was used to connect with the spiritual realm as well as treating various ailments.

As the sound of African drums thundered through the pub, several traditional music lovers from the audience took to the floor.

Memory Mutangira-Patare, a mbira enthusiast who spoke to Xinhua after the concert, was happy about the resumption of shows.

“It’s been difficult for us during the COVID-19 pandemic, but now that shows have resumed, we are very happy, we are dancing, we do everything that we want and it makes everyone happy,” she said.

“We were very happy, everyone here was very happy. We encourage Zimbabweans to go back to our culture so that all can go well,” said Shamiso Madzima, a fan of Nhedega.

Despite the return of musical events, all social gatherings are still capped at 100 people to prevent the spread of COVID-19.

Nhedega, who is also a talented actor, said his aim is to make traditional music attractive to young people.

Many young people in Zimbabwe consider traditional music as ancient, and even demonic.

“This is something new that we are trying to introduce. We are trying to attract a new crop of people, people of our ages who do not appreciate mbira. We are bringing a new approach that has not been adopted by mbira players,” he said.

The talented musician who started playing mbira at 12 years old said apart from its cultural significance, mbira music has meditative and healing properties.

“There are a lot of functions that mbira plays,” said Nhedega, who believed that Mbira has healing powers to people who are sick.

Traditionally music was used to teach social values and history, celebrate festivals and help communities connect with their ancestors in the country.