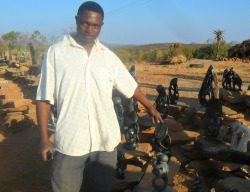 STONE sculptors who sell their products at Mawabeni Art Centre in Esigodini along the Bulawayo/Johannesburg highway have accused police of scaring away potential customers by mounting regular roadblocks near the centre.
Artists who spoke to New Zimbabwe.com this week complained that since police started setting up regular roadblocks near the centre, business had gone down.
“I have been selling my wares at this site since 1990 when a lot of tourists used to pass -by and buy our products. Now since the introduction of the multicurrency, police have developed the habit of setting up roadblocks here almost on a daily basis.
“These roadblocks are scaring away our clients who are now afraid to stop and buy our products,” said Henry Moyo, a fine art sculptor.
Moyo said the decline in foreign tourists as a result of the roadblocks has adversely affected their business as local people do not sometimes appreciate the importance of sculptures.
“Most of our clients are people who drive vehicles with foreign number plates. The moment our police officers see a vehicle with foreign number plates, they harass the occupants hoping to get cash from them.
“Because of that, potential clients will have been frustrated and they do not have any time to buy our products,” said Gertrude Mwale, a sculptor.
Mwale said they have tried on numerous occasions to engage the police over the issue but to no avail. Motorists and other members of the public have, on many occasions, raised concerns over the high number of road blocks arguing they negatively affect tourism.
The police have insisted that the numerous roadblocks are meant to reduce carnage. Even captains of the industry and MPs have said it, publicly, that the number of roadblocks on Zimbabwe’s highways are affecting tourism.