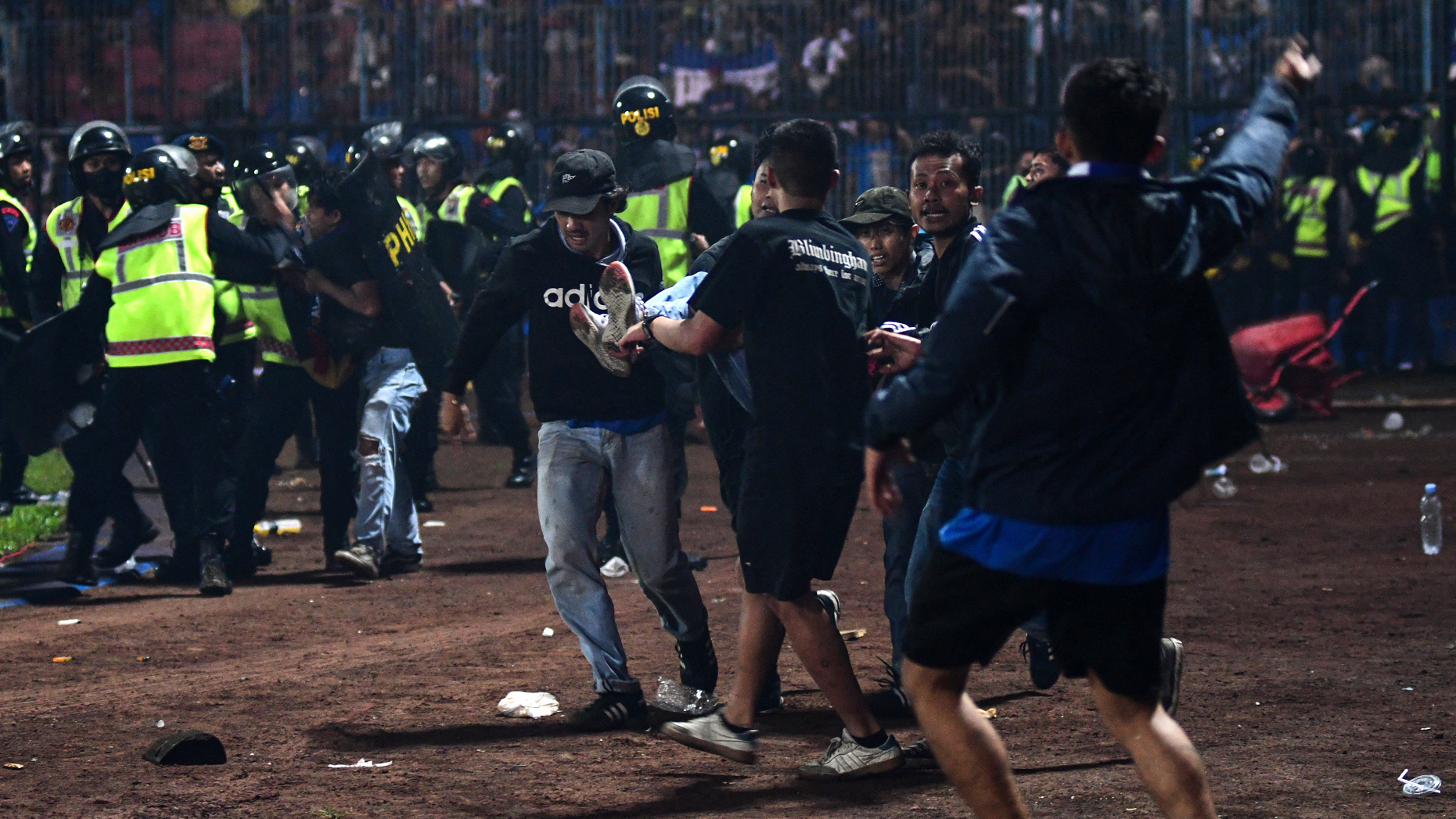 MALANG, Indonesia (AP) — Panic and a chaotic run for exits after police fired tear gas at an Indonesian soccer match to drive away rampaging fans left at least 174 dead, most of whom were trampled upon or suffocated, making it one of the deadliest sports events in the world.

Attention immediately focused on the police use of tear gas, which is banned at soccer stadiums by FIFA. The president of the world soccer body called the deaths at the stadium “a dark day for all involved in football and a tragedy beyond comprehension,” while President Joko Widodo ordered an investigation of security procedures.

Violence broke out after the game ended Saturday evening with host Arema FC of East Java’s Malang city losing to Persebaya of Surabaya 3-2.

Disappointed with their team’s loss, thousands of supporters of Arema, known as “Aremania,” reacted by throwing bottles and other objects at players and soccer officials. Witnesses said fans flooded the Kanjuruhan Stadium pitch and demanded that Arema management explain why, after 23 years of undefeated home matches against rival Persebaya, this one ended in a loss.

The violence spread outside the stadium where at least five police vehicles were toppled and set ablaze. Riot police responded by firing tear gas, including toward the stadium’s stands, causing panic among the crowd.

Some suffocated and others were trampled as hundreds of people ran to the exit to avoid the tear gas. In the chaos, 34 died at the stadium, including two officers, and some reports include children among the casualties.

More than 300 were rushed to hospitals but many died on the way and during a treatment, Afinta said.

East Java’s Vice Gov. Emil Dardak told Kompas TV the death toll had climbed to 174, while more than 100 injured people are receiving intensive treatment in eight hospitals, 11 of them in critical condition.

Indonesia’s soccer association, known as PSSI, suspended the premier soccer league Liga 1 indefinitely in light of the tragedy and banned Arema from hosting soccer matches for the remainder of the season.

Television reports showed police and rescuers evacuating the injured and carrying the dead to ambulances.

Grieving relatives waited for information about their loved ones at Malang’s Saiful Anwar General Hospital. Others tried to identify the bodies laid at a morgue while medical workers put identification tag on the bodies of the victims.

“I deeply regret this tragedy and I hope this is the last soccer tragedy in this country, don’t let another human tragedy like this happen in the future,” Widodo said in a televised speech. “We must continue to maintain sportsmanship, humanity and a sense of brotherhood of the Indonesian nation.”

He ordered the youth and sports minister, the national police chief and the PSSI chair to conduct a thorough evaluation of the country’s soccer and its security procedure.

Youth and Sports Minister Zainudin Amali also expressed his regrets that “this tragedy happened when we were preparing for soccer game activities, both national and international level.”

Indonesia is due to host the 2023 FIFA U-20 World Cup from May 20 to June 11, with 24 participating teams. As the host, the country automatically qualifies for the cup.

In a statement, FIFA President Gianni Infantino expressed condolences on behalf of the global football community, saying “the football world is in a state of shock.” The statement did not mention the use of tear gas.

Ferli Hidayat, local police chief of Malang, said there were some 42,000 spectators at the game Saturday, all of whom were Arema supporters because the organizer had banned Persebaya fans from entering the stadium in an effort to avoid brawls.

The restriction was imposed after clashes between supporters of the two rival teams in East Java’s Blitar stadium in February 2020 caused 250 million rupiah ($18,000) in damage. Brawls were reported outside the stadium during and after the semifinals of the East Java Governor’s Cup, which ended with Persebaya beating Arema 4-2.

Rights groups responded to the tragedy by blaming the use of tear gas in the stadium by police.

Citing FIFA’s stadium safety guidelines that prohibit the carrying or use of “crowd control gas” by pitch side stewards or police, Amnesty International called on Indonesian authorities to conduct a swift, thorough and independent investigation into the use of tear gas at Kanjuruhan stadium.

“Those who are found to have committed violations are tried in open court and do not merely receive internal or administrative sanctions,” said Usman Hamid, executive director of Amnesty International Indonesia.

He said tear gas should only be used to disperse crowds when widespread violence has occurred and when other methods have failed. People must be warned that tear gas will be used and allowed to disperse. “No one should lose their lives at a football match,” Hamid said.