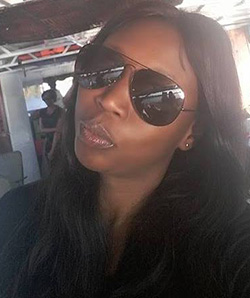 THE late Zimbabwe Tourism Authority staffer Belinda Mutinhiri and Mashonaland East Provincial Affairs minister, Ambrose Mutinhiri’s daughter, Belinda, has been honoured for her contribution to tourism in Southern African region.
Belinda, who was the daughter of Mashonaland East provincial minister Ambrose Mutinhiri, died in last month in a car crash near Borrowdale Race Course in Harare.
A popular Harare socialite, Belinda led was ZTA Africa marketing manager at the time of her death.
In a statement last week, the tourism authority said Belinda would be posthumously be awarded the Africa Tourism Personality of the Year 2016 at an event to be held in Lagos, Nigeria on October 30.
“The Africa Travel Awards 2016 is citing and acknowledging the late Belinda as one of the early promoters of Intra Africa Tourism who was chosen by voters from all over Africa,” said ZTA.
Chief executive Karikoga Kaseke said Belinda deserved to be recognised even before her death because of her hard work.
“If there was anything that distinguished and set Belinda apart from the rest in the organisation, it was her energy, cheerfulness and jovial mood – attributes which are critical for a complete and wholesome destination marketer,” said Kaseke.
According to ZTA, the prestigious accolade is part of the Africa Travel Awards which are organised and promoted by ATQnews.com which is a member of Travel Media Group.
Tourism and Hospitality Industry Minister, Walter Mzembi, was also among the winners of the same award.
Before she joined ZTA in 2006, Belinda worked as a guest relations executive at hotels in London and also served as customer relations executive at British Petroleum.Advertisement