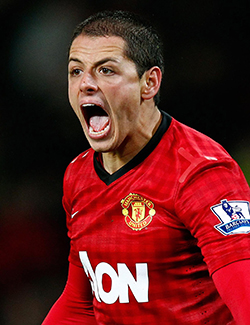 LIVERPOOL are on red alert after Manchester United told Javier Hernandez he is free to find another club, according to a report.
Hernandez broke his collarbone playing for Mexico and could be out for up to eight weeks but United still hope to sell him this window.
The 27-year-old has scored 59 goals in 154 games for United but the Red Devils are ready to listen to offers for him.
The Daily Star report that United’s £8 million asking price for the Mexican will not deter Liverpool from making a bid.
Robin van Persie agrees personal terms with Fenerbahce
Robin van Persie looks set to leave Manchester United after he agreed terms with Turkish side Fenerbahce, according to a report
The Guardian claim that Van Persie’s agent, Kees Vos, has been in Istanbul for the last few days to trash out personal terms even though the two clubs are yet to agree a deal.
It had been previously reported that Van Persie had been touted around the Turkish Super Lig in January.
“United had sent people to test the water for a move,” former Feyenoord star Pierre Van Hoojidonk told the Daily Mirror.
Van Persie’s wife was initially said to have reservations about the proposed switch, but, having spent some time in the Turkish capital, has warmed to the idea, adds the report.
Gunners to make Karim Benzema move
Arsenal are ready to offer £17.8million for Karim Benzema with Real Madrid ready to sell, according to reports.
Having secured a deal for goalkeeper Petr Cech, Arsene Wenger is said to have turned his attentions to adding a top class striker to his ranks.
The Metro cite reports in Spain that claim £17.8million will be enough to secure the services of Benzema, who scored 22 goals last season.
City want Pogba, De Bruyne, Sterling and Delph in £100m midfield revamp
Manchester City will kick-start their summer transfer plans this week after Uefa lifted the FFP transfer restrictions on the club. City had their spending capped at £49m last season but that has now been relaxed.
A midfield revamp is clearly the priority for Manuel Pellegrini’s side after James Milner and Frank Lampard left earlier in the summer – with Juventus’ Paul Pogba, Wolfsburg’s Kevin De Bruyne and Aston Villa’s Fabian Delph all desired, as well as the club planning another bid for Liverpool winger Raheem Sterling.Advertisement

Liverpool are adamant they will not sell the England international for less that £50m and it’s thought that Wolfsburg will demand a similar fee for Belgium star De Bruyne. Paul Pogba could cost considerably more than that, at around £70m, while Fabian Delph is believed to be available for a (relative) bargain at £8m due to a release clause in his contract.
Atletico Madrid step-up interest in Santi Cazorla
Atletico Madrid have been linked with a move for Arsenal’s Santi Cazorla for more than a year and it appears the 30-year-old Spanish international is a priority for them again this summer.
The Daily Mail claim the playmaker is seen as the ideal candidate to replace the outgoing Arda Turan at the Vicente Calderon and they will could make a move for him once the Turkish international departs. The diminutive midfielder was one of Arsenal’s players of the season last year, starring in a deeper-lying midfield role, and would be an outstanding addition for any side in Europe of his current form.