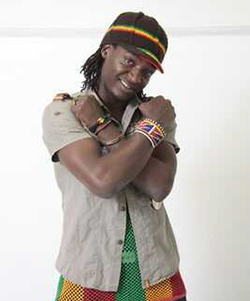 REGGAE outfit, Transit Crew’s front man, Mannex, has left the group and has since recorded two songs with the band, Zim Reggae Stars.
The talented singer and songwriter, born Emmanuel Motsi, told New Zimbabwe in an interview that the decision to go solo was necessitated by the desire to pursue his music vision as a reggae artist.
“It’s all about the vibe that is coming out of me. I realised there are very few reggae bands and reggae music has to spread,” he said.
“I had my vision and Transit Crew is an entity which started way before I was there and I feel it is time to do my own thing and it will be a continuation of spreading the music and I have formed my own band.”
Mannex said his separation with Transit Crew was mutual and there were no hard feelings, adding that he sometimes played with them on some of their shows.
The gifted artist said he was working on an international love song in which he will be featuring Jamaican artists, Turbulence and Mega Banton as well as Episode from Ghana.
He is also doing solo acoustic shows with his first public appearance being at the HIVOS stand at the recently held HIFA.
The star said Zimbabwean reggae music was destined for greater heights, adding he was going to play the leading role in taking the music beyond the country’s borders.
“I was speaking to Turbulence and Mega Banton and they were saying, compared to other African countries, Zimbabwean reggae music is number one.
“But I still feel we are yet to really get there and I am gonna do it.”
Mannex paid tribute to Zimdancehall musicians but urged them to also do conscious reggae.
“Zimdancehall is amazing and is freeing up the ghetto. It is contributing to the future of Zimbabwean music.”
He added that the 75 percent local content policy had gone a long way in promoting Zimbabwean music.Advertisement