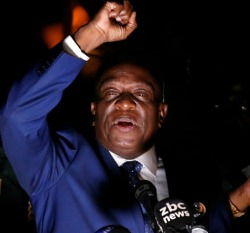 This article is taken from The Conversation
When the first reports appeared of military tanks approaching Zimbabwe’s capital, Harare, questions started flooding my mind: would this mean a transition in power? And would it be a transition of the kind regarded as “model” transitions – transition from dictatorship to democracy?
Ever since it became clear that Emmerson Mnangagwa would be inaugurated as the next president, there are fears that the country wouldn’t go through a genuine transition, that one dictator might simply replace another as was the case in Egypt.
Transitional justice is a term coined by the scholar Ruti Teitel in 1990. She defined it as a form of justice that could address the legacy of human rights violations and violence during a society’s transition from an authoritarian regime to a democratic one. Transitional justice refers to the ways in which countries emerging from periods of conflict and repression address large scale human rights violations so numerous and serious that the normal justice system is unable to provide an adequate response.
Transitional justice has become a vital part of modern peace building efforts alongside disarmament, security sector reform and elections. The United Nations views it as the full range of processes associated with a society’s attempt to come to terms with a legacy of large-scale past abuses with a view to ensuring accountability, serving justice and achieving reconciliation.
It encompasses issues such as whether the perpetrators of serious human rights violations under a previous regime should be prosecuted or pardoned. It also involves looking at reparations, institutional reform, public recognition of violations and whether and how investigations should be initiated to uncover the truth about past violations.
It’s still unclear whether Zimbabwe will manage an effective transition to participatory democracy and freedom. But the current signs are not encouraging.
Transitional justice in Zimbabwe
After three decades of state sponsored violence, there is an acute need to break the culture of impunity that has become entrenched in Zimbabwe. The steady erosion of human and political rights has further led to a lack of faith in the rule of law.Advertisement

Early excitement about prospects of transitional justice in Zimbabwe has already been dampened by the agreement struck between the military and the outgoing president. The deal entails exempting Robert Mugabe from prosecution for crimes committed during his 37 years in office. The immunity deal reportedly covers numerous members of Mugabe’s extended family, including his stepson and nephews. It may also include senior ruling party officials detained by the military as well as those who are currently overseas.
This immunity agreement creates grave doubts about the legitimacy of the foundation on which the new Zimbabwe will be built.
It’s clear that the agreement violates international law. Under Mugabe’s rule opposition supporters suffered harassment, intimidation, forced removal and death. Crimes against humanity were also committed. There are also strong allegations that Mugabe ordered his opponents to be tortured. International law holds that to be guilty of torture, it isn’t necessary that a person should have directly participated in torture. Ordering torture is sufficient to warrant conviction.
There are other reasons to doubt whether Zimbabwe’s new leadership is interested in pursuing transitional justice. For example, would they be prepared to look back at post-independence crimes such as the Gukurahundi massacre in Matabeleland that claimed the lives of 20 000 people? Given Mnangagwa’s prominent role in this massacre it’s highly unlikely that official attempts will be undertaken to uncover the truth of this massacre.
Measured against the South African transition, it is already clear that the “transition in Zimbabwe” is imperfect. This is because it lacks democratic legitimacy. Unlike the wave of transitions from socialism to democracy in Central and Eastern Europe in the late 1980’s and early 1990’s the Zimbabwean transition, at this stage, does not look as if it has the potential to truly liberate Zimbabwean citizens and to convey them into a state in which human rights are supreme.
Free passage for Mugabe
Former Zimbabwe finance minister and opposition party member Tendai Biti said in a recent interview with South Africa’s Sunday Times that there was no point in prosecuting Mugabe. He said:

we cannot let the past continue to hold the future, and Mugabe is in the past… He must be given the right of free passage…

But Mugabe does not deserve a “right of free passage”. To award him this right would be to make a mockery of the principles of international law, transitional justice and the ongoing suffering of millions of Zimbabweans.
Biti emphasised the importance of economic growth and transformation. As a former finance minister he should know that financial prosperity cannot be separated from social cohesion and respect for the rule of law.
Mia Swart