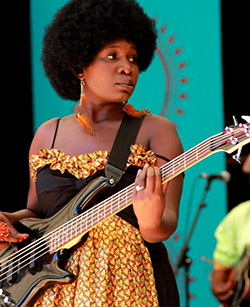 GOVERNMENT must take a legislative approach to promoting the creative arts industry as well as acknowledge the sector as a profession, the Zimbabwe Union of Musician (ZUM) has said.
In a recent interview with NewZimbabwe.com, ZUM national chairperson, Edith WeUtonga said artists were encouraged by the education ministry’s decision to introduce performing arts as a subject at primary school level.
“The creative arts are something that has been an option after a person has failed at something in life,” said WeUtonga.
“But introduction of performing arts in the new curriculum in schools is a plus for us and we are happy as musicians that professionals can now teach these young kids music.”
She added, “And those already in the industry will, one day, also be invited to come and teach the children how to play instruments and make a living from the arts.
“So, in the not so distant future our government will recognise the sector as a profession.”
The ZUM national chairperson said, at the moment, musicians were looked down upon, adding that the treatment they are subjected to was “pathetic and sad”.
“We are the first one to get to a venue; we are the last ones to leave, we are the last ones to be given food,” she said.
“We are the last ones to be paid, we are the last ones if ever mentioned at all in Parliament.”
WeUtonga also urged musicians to prepare for their retirement “as the career has a life span”.
“We don’t want to be paupers when we retire, so let’s prepare when we still have the time and when our music is still in demand.”
Recently WeUtonga and other musicians struck a deal with Sonoton Music which will see their music being distributed internationally.
WeUtonga was part of the all-female band, Amakhosikazi; a project at the Bulawayo-based Amakhosi Theatre Productions where she arranged and composed music before forming her own band Utonga.Advertisement