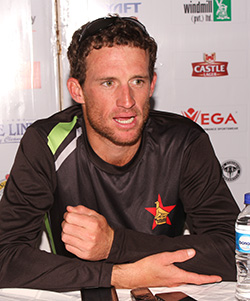 ZIMBABWE
The tournament hosts didn’t do themselves any favours by chopping and changing the squad throughout the recent three ODIs against the Proteas. If not a positive results margin, a settled set-up would have served them better going into this considerably stiffer test. Alas, the selectors have other ideas – and your guess as to the composition of the squad will be as good as captain Elton Chigumbura’s deduction.
Overcoming opposition substantially stronger in the International Cricket Council rankings, regardless, will remain the daunting task at hand. The team is not short of spirit and a change of scenery – from Bulawayo to Harare – will bring a change in conditions, and perhaps fortune. Chigumbura must come to the party, to justify the veteran Brendan Taylor’s loss of the captaincy.
Key Man: All-rounder Sean Williams is proving as key with the ball as he is with the bat – and will come more into play amid reservations over former skipper Prosper Utseya’s bowling action.
SOUTH AFRICA
The Proteas ongoing experimentation with combinations can continue against the Zimbabweans – but must all but be finalised in twin fixtures against the Australians. Consistently billing each and every match as a build-up to the World Cup, now is the time for captain AB de Villiers and coach, Russell Domingo, to walk the talk. They weren’t entirely convincing in the three ODIs this month.
The return of fast bowlers Dale Steyn and Morne Morkel will certainly help, while the absence of the injured Vernon Philander and Beuran Hendricks isn’t ideal. The inexperienced Kyle Abbott and Mthokozisi Shezi, though, are worthy like-for-like replacements. And time will soon tell if the rookie Rilee Rossouw can crack it on the big stage.
Key Man: Left-arm seamer Wayne Parnell is becoming a senior member in this attack, and did a good job in leading by example in the recent three-nil whitewash over the Zimbabweans. Always second fiddle to Morkel and Steyn, though, he must maintain a niche role regardless.
AUSTRALIA
The Aussies hardly ever associate themselves with Zimbabwe cricket in a positive light – and their media have done an embarrassing job in labelling the country the worst to tour. Coach Darren Lehmann has suggested the squad is rusty but ready, while captain Michael Clarke – like the South Africans – is eager to finalise options ahead of the 2015 World Cup.
The side is somewhat understrength, with all-rounder Shane Watson and batsman David Warner absent due to impending fatherhood. Opportunity knocks for the inexperienced Ben Cutting and Kane Richardson, then. Amid a plethora of limited-overs fixtures this week and the next, the Australians will surely play the most attractive cricket.Advertisement