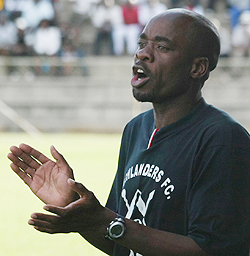 Triangle 6-0 Whawha, Highlanders 1-1 Harare City
TRIANGLE returned to the top of the Castle Premiership on Sunday when they crushed Whahwa 6-0 at Gibbo Stadium.
The win sees coach Kelvin Kaindu’s men move to 20 points after six wins, two draws and a loss but have scored 23 times compared to second placed Chicken Inn, who have the same number of points.
Praise Tonha scored twice in the opening three minutes to get Triangle off the blocks before Lameck Nhamo added the third midway through the half.
It was 4-0 by halftime after Zambian import Anthony Sakala got himself on the score sheet with a header after a sublime cross from Nhamo.
After the breather, Triangle did not take the foot off the pedal with Pascal Manhanga heading in the fifth five minutes into the second half before Young Warriors forward Malvern Gaki made it a 6-0 in the 87th minute.
This is the second time in two weeks that Whahwa has been whacked 6-0 after losing by the same scoreline to How Mine in Bulawayo two weeks ago before bouncing back to shock defending champions Dynamos 1-0 at Ascot on Wednesday.
At Barbourfields, Gabriel Nyoni equalised six minutes into second half added time as Highlanders picked up a point in their 1-1 draw against Harare City. William Manondo had scored for the visitors after 27 minutes.
Highlanders had the chance to grab all the three points but City goalkeeper Tafadzwa Dube saved a penalty from his opposite number Arial Sibanda on the hour.
At the Colliery, Hwange recorded their first win of the season when they beat Flame Lily 2-0 to move off the relegation zone.
Aleck Marime scored the opener for Hwange in the 55th minute before Gilbert Zulu made it 2-0 four minutes to seal their first win of the season that took them to position 11 with nine points.
At Sakubva, Caps United arrived 25 minutes late for the match as the players threatened to boycott the game, again, due to unpaid allowances and salaries after only being paid $30 after the match against Chicken Inn on Thursday.
The match ended 0-0 with both teams missing penalties-Rodreck Mutuma for Caps and Jacob Muzokomba for the Buffaloes.
Sunday:  Triangle United 6-0 Whawha, Hwange 2-0 Flame Lily, Dynamos 1-0 FC Platinum, Highlanders 1-1 Harare City, Buffaloes 0-0 Caps United
Saturday: ZPC Kariba 1-1 Chicken Inn, How Mine 1-0 Tsholotsho, Chapungu 3-0 Dongo SawmillAdvertisement