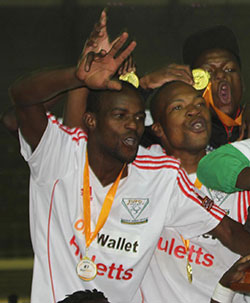 Dynamos 1-1 Triangle
Triangle win 4-3 (after penalty shootout)
LITTLE Triangle shocked  Dynamos when they edged them 4-3 on penalties in the Net One Wallet Cup final at the National Sports Stadium on Sunday.
Triangle coach Biggie Zuze went into the match seeking revenge having been beaten 2-0 in the Mbada Diamonds Cup final by the same team in 2012.
Sunday’s victory was made special by the fact that Triangle finished the match with 10 men.
Zuze gave credit to his players for imposing themselves in the match and never showing any respect to Dynamos as they held their nerves to walk to the winners’ podium- the first time for the Chiredzi based side to win major silverware.
“This is a good win for us,” said Zuze.
“I would like to give credit to the players. You know what it is to play against Dynamos in a cup final but they handle the pressure very well. They showed discipline throughout the 90 minutes.
“They didn’t give up despite being one man down. We won the match in midfield.  This is my first silverware in my coaching career and I will cherish this for ever.”
Triangle have been struggling in the last few league games but Zuze believes the victory over Dynamos will give his charges confidence as league action resumes.
“This is the victory we have been looking for to bring back confidence into the team. We hope this will be the turning point,” he said.
His opposite number Calisto Pasuwa admitted the Harare giants were wasteful and failed to take advantage of their numerical superiority.

“Maybe we should have buried the match in 90 minutes. Some of the players were not putting effort.
“We resorted to high balls going forward and failed to take advantage when one of their players was sent off,” said Pasuwa looking dejected and downcast.
Triangle converted all their spot kicks through Praise Tonha, Hillary Bakacheza and Tichaona Chipunza.
Augustine Mbara, Ronald Chitiyo and Blessing Moyo converted for Dynamos while Tafadzwa Rusike and Thomas Magorimbo missed their spot kicks. The match had ended 1-1 after extra time.
Dynamos started brightly carving out good chances with Blessing Moyo and Washington Pakamisa coming close.
As the hosts appear to be set for a routine victory-dreadlocked Felix Kuswatuka connected a free kick by Praise Tonha to thrust his side into the lead on 19 minutes.Advertisement

Dynamos however levelled matters on 41 minutes after Rodreck Mutuma was allowed a free header following a free kick by Magorimbo.
In the second half, Dynamos came back launching wave after wave of attack in their opponents’ goal but the visitors held on until the match went into extra time and finally the dreaded penalty shootout.