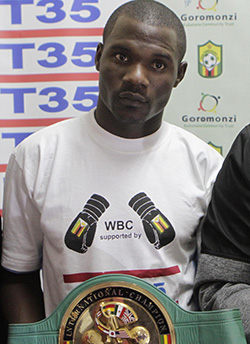 WORLD Boxing Council welterweight bronze champion, Charles Manyuchi, recently defended his crown in Italy and would have expected a hero’s welcome as he arrived at Harare International Airport.
He was in for a surprise.
Eager beavers from the Zimbabwe Revenue Authority (Zimra) were waiting for him. The taxman reportedly wanted him to pay duty for his trophy.
The tax officials apparently argued that the boxer was importing the trophy since his name was not inscribed on to prove it was part of his prize for knocking out Italian challenger Gianluca Frezza in the sixth round.
The Zimra officials seized the trophy as well as the boxer’s passport.

The incident was confirmed by Manyuchi’s manager, Zambian Christopher Malunga of Oriental Quarries Boxing Promotions.
Speaking at a press conference last Thursday, Malunga said his boxer did not deserve such treatment as he was carrying Zimbabwe’s flag.
“I am not happy with what the immigration officials did.
“The boxer was carrying the Zimbabwean flag and did not deserve such harassment, “said Malunga.
The 26-year-old boxer had just arrived from Italy through Zambia when the items were seized.
“The officials from Zimbabwe immigration withheld his trophy and passport, insisting Manyuchi’s name was supposed to be on the trophy and as I speak right now, our star does not have his travelling document,” said Malunga.
He said the name on the Trophy belonged to a former Italian Boxing Legend and is inscribed 30’ Trofeo Carnera.
The boxer’s manager ran out of words on the passport saga only revealing that it was a sad incident which should not happen again.
“I am not happy with what happened at the airport but I want to assure you that such an incident will be the last one,” he added.
According to Malunga, the issue has been since raised with President Robert Mugabe’s office. The veteran leader hosted the star at his Munhumutapa offices Thursday morning and also took him to Cabinet where he met government ministers.
Malunga said the matter was being “handled with the relevant authorities.”
“I do not want to be involved in politics here because I am a sportsman and also Manyuchi’s manager.Advertisement

“Any issues of concern must be raised with the relevant ministry officials who will be able to give you full details on why they took his trophy and passport,” Malunga added.
Manyuchi received $12,000 for the match and his Manager has plans for the boxer to fight Amir Khan who has silver on World Boxing Champion (WBC) ranks.
ZIMRA officials were not picking up phones when contacted for comment.