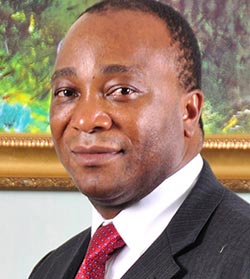 TROUBLED Interfin Bank Limited, which was placed under curatorship over one and half years ago, requires at least $50 million to revive its operations, an official said last week.
The bank’s managing director, Raymond Njanike told journalists following the annual general meeting of its parent company, Interfin Financial Services Limited (IFSL) on Thursday that an unnamed investor would commence due diligence next week.
“This should not take long because most of the information they have got already. I would say it (due diligence) should take about two months at most,” he said.
The bank, which is the group’s only operating subsidiary urgently requires $50 million and cannot rely on funds owed by debtors due to cash squeeze in the economy.
IFSL owns Interfin Bank and CFX Bank which are under liquidation as well as CFX Properties which is dormant.
Njanike said the bank’s properties that were put on the market for sale were either not attracting buyers or were fetching low price offers.
At the AGM, group chairman Timothy Chiganze told shareholders that the bank’s curator, Peter Bailey of KPMG Chartered Accountants had made efforts to recover funds from debtors, some of whom had been taken to court.
He said judgments to recover nearly $64 million had been obtained from the courts while provisional sentences to the tune of $16 million had been issued. Summons worth $3.2 million were suspended while a debt of $512 000 had been repaid.
Chiganze said judgments were pending in cases in which the bank is pursing $23 million from debtors.
“All the debtors will be pursued to the end. I can assure you about that,” he said.
The bank owes its depositors $70 million.
Meanwhile, Chiganze said some of the offers they were receiving from potential investors included restructuring the loan book and converting debt into equity, which would affect current shareholders.
This was the company’s first AGM since 31 August in 2011 because its books were not audited as required by law. In addition, the group could not finance the meetings.
Shareholders passed resolutions for 2011 and 2012 which included adoption of financial statements, approval of auditors’ fees and their reappointment.
Chiganze said in 2012 the group recorded a profit because the loss from the bank had disappeared, realising a profit of $36 million although its only on paper.Advertisement

“It will come back and become real value through new investments,” he said.
A new board for IFSL could not be appointed as there were no nominations and the matter was referred to shareholders.
Currently the Interfin Bank board doubles as the IFSL board after failing to attract new members following the resignation of previous board members.
The former chairman, Farai Rwodzi is barred from holding any directorship in the company.
Interfin was placed under curatorship after an investigation alleged looting by major shareholders, leaving the bank saddled with non-performing insider loans of $60 million.
The investigation also alleged poor corporate governance and general abuse of depositors’ funds by the shareholders who included the bank’s founders Farai Rwodzi, Timothy Chiganze and Jerry Tsodzai and individuals linked to them.
The bank had a concentrated shareholding structure in which founders Rwodzi, Chiganze and Tsodzai owned a combined stake of 54,21 percent through various investment vehicles.
Rwodzi and Chiganze chaired the boards of Interfin Financial Services and the bank, respectively.