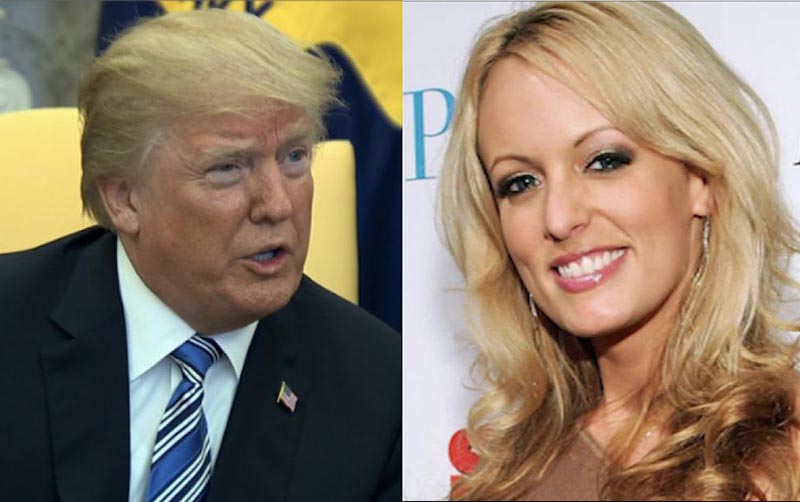 Trump tweeted that his personal lawyer Michael Cohen used a retainer to pay off Stormy Daniels, who claims to have had sexual relations with the now president.

But Trump slammed claims of an affair with Daniels — whose real name is Stephanie Clifford — as “false and extortionist.”

Cohen’s payment was made days before the November 2016 US presidential election, potentially violating campaign financing laws.

Separately, NBC news on Thursday revealed that the FBI has for months had a wiretap on Cohen’s calls, including potential presidential contacts.

In a burst of tweets, Trump denied the hush money was connected to his campaign, calling it a “private agreement.”

“Mr. Cohen, an attorney, received a monthly retainer, not from the campaign and having nothing to do with the campaign, from which he entered into, through reimbursement, a private contract between two parties, known as a non-disclosure agreement, or NDA,” Trump said.

“The agreement was used to stop the false and extortionist accusations made by her about an affair, despite already having signed a detailed letter admitting that there was no affair,” he said.

“Prior to its violation by Ms. Clifford and her attorney, this was a private agreement. Money from the campaign, or campaign contributions, played no roll [sic] in this transaction.”

The admission came at an awkward time for Trump, hours before he hosted religious leaders at the White House for a National Prayer Day event, which the first lady did not attend.

Trump ignored questions about the issue from the press, and guests, many of whom were political supporters of the president, shouted “shame on you” at reporters.

His admission came after Rudy Giuliani, the former New York mayor who recently joined the president’s legal team, disclosed Wednesday that Trump had reimbursed Cohen for the payment over a period of several months.

It also followed an FBI raid in early April on Cohen’s home, office and hotel room in which information related to the payments was reportedly seized.

Daniels has sued to have the non-disclosure agreement invalidated on grounds that Trump never signed it.

In his tweets, Trump insisted the agreement is “in full force and effect and will be used in Arbitration for damages against Ms. Clifford (Daniels),” he said.

Giuliani told Fox News host and Trump supporter Sean Hannity that the money was funneled through a law firm “and the president repaid it.”

“That was money that was paid by his lawyer, the way I would do, out of his law firm funds or whatever funds, it doesn’t matter. The president reimbursed that over a period of several months,” Giuliani said.

He added that the payment did not represent a campaign financing violation because it was “not campaign money.”

Giuliani told The New York Times he had documentation proving Trump had reimbursed the sum, which he said “removes the campaign finance violation” prospect.

Pressed on whether he knew where Cohen got the money to make the payment, he said: “No, I don’t know. No.”

Giuliani also told The Wall Street Journal Trump was “probably not aware” of the payment at the time it was made, having given Cohen broad “discretion to solve” a variety of issues.

Daniels’ lawyer Michael Avenatti reacted swiftly to the revelation, accusing the US president of lying.

“We predicted months ago that it would be proven that the American people had been lied to as to the $130k payment and what Mr. Trump knew, when he knew it and what he did in connection with it,” he wrote on Twitter.

“Every American, regardless of their politics, should be outraged by what we have now learned. Mr. Trump stood on AF1 and blatantly lied.”

Daniels filed a lawsuit against the president on Monday for defamation after he trashed her claim that she had been threatened by a man representing Trump in 2011.