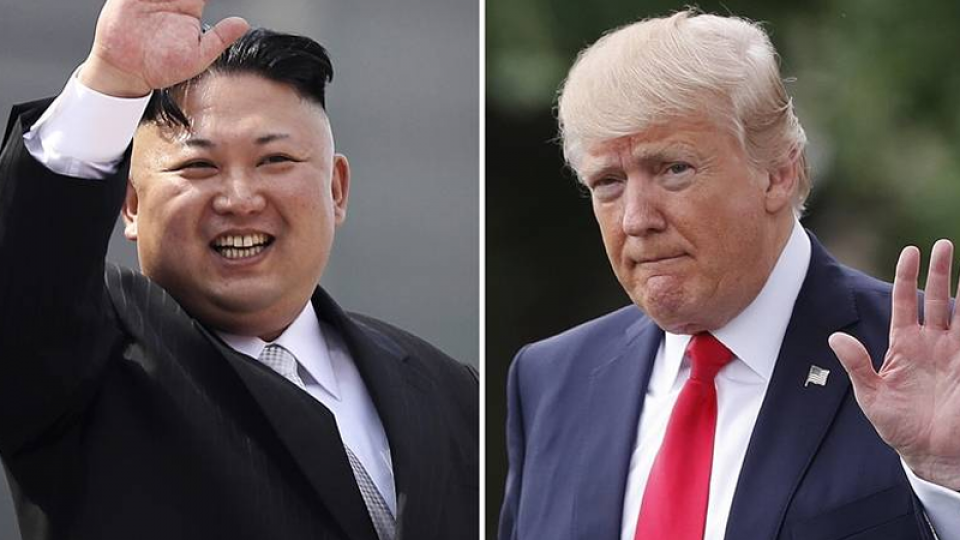 President Donald Trump has agreed to a historic first meeting with Kim Jong Un in a stunning development in America’s high-stakes nuclear standoff with North Korea.

Standing in front of the White House, South Korean National Security Advisor Chung Eui-yong announced the first ever meeting between a US president and a North Korean leader, which he said would take place by the end of May.

Chung had recently returned from Pyongyang, where he met Kim who, he said, “expressed his eagerness to meet President Trump as soon as possible.”

Trump hailed “great progress” in the push to persuade Pyongyang to end its nuclear weapons program.

“Meeting being planned!” he tweeted. “Kim Jong Un talked about denuclearization with the South Korean Representatives, not just a freeze. Also, no missile testing by North Korea during this period of time.”

“Great progress being made but sanctions will remain until an agreement is reached.”

News of the summit, which South Korean President Moon Jae-in said was “like a miracle”, is the latest step in a quickening detente.

North and South Korea exchanged envoys as Pyongyang sent a delegation to the South’s Winter Olympics, which Seoul had dubbed the “Peace Games”.

The thaw came after a period of extreme tension between Washington and Pyongyang that sounded like the growing drumbeat of war.

Just months ago, Trump mocked Kim by calling him “little rocket man”. Kim returned the favor by describing Trump as “mentally deranged” and a “dotard.”

The United States and North Korea were foes throughout the Cold War and fought on opposite sides of a bloody war in the 1950s.

In the last two decades, they have been engaged in what is perhaps the world’s most dangerous nuclear standoff, with 30,000 US military personnel stationed just over the border in the South.

Pyongyang’s long race to develop a nuclear weapon capable of hitting the continental United States has proved a problem for successive US administrations.

Trump’s strategy has been to ramp up sanctions, tighten the diplomatic screws and regularly threaten military force.

he White House said in a statement that its strategy of “maximum pressure” would stay in place, for now.

“We look forward to the denuclearization of North Korea. In the meantime, all sanctions and maximum pressure must remain.”

But the prospect of a top-level meeting is a paradigm shift.

North Korean leaders have sought face-to-face talks with consecutive US presidents, who have rebuffed the idea as an effort to achieve strategic parity that does not exist.

Pyongyang now seems to have achieved its goal, while only agreeing to a temporary suspension of nuclear tests.

It is a gambit fraught with risk for Trump. On multiple occasions, Kim’s father Kim Jong Il dangled the prospect of talks and denuclearization as a means of buying time, easing sanctions and dividing South Korea from its allies.

However, Trump’s decision also carries historic echoes of Richard Nixon’s visit to communist China or Barack Obama’s overture to Cuba, both of which offered the hope of better ties.

The table was set for the announcement on Tuesday when South Korea announced the North had stated there was “no reason” to hold on to its nuclear weapons “if military threats towards the North are cleared and the security of its regime is guaranteed.”

In the past North Korea has indicated that security guarantees mean the departure of US forces from the Korean peninsula and the end of a mutual defense treaty with the South.

The North was open to “frank” talks with the United States on denuclearization and would suspend missile and nuclear tests while dialogue was under way, Chung said after returning from a meeting in Pyongyang.

Trump welcomed the move as “very positive”, though Vice President Mike Pence said the US position towards North Korea would not change “until we see credible, verifiable, and concrete steps toward denuclearization.”

Japan, a key regional ally, hailed the Thursday summit announcement which it said was “on the premise of denuclearisation”, but added there would be no let up in the diplomatic pressure on Pyongyang.

Russia said talk of a meeting was “a step in the right direction”, while China welcomed a “positive signal by the US and North Korea”.

“The May meeting will be recorded as a historic milestone that realized peace on the Korean Peninsula,” he said.

The European Union also hailed the announcement as a “positive development”, while German Chancellor Angela Merkel said it offered a “glimmer of hope”.

But analysts were damning, saying a US-North Korea summit was a win for Kim.

“It essentially provides him equal status with the US president and strengthens his bid to have North Korea be recognized as a de facto nuclear power,” said Evan Medeiros, of the Eurasia Group think tank, and a former Asia advisor to Barack Obama.

It “will not lead to North Korea’s denuclearization. Instead, it will enhance the stature and legitimacy of Kim’s regime, give him more time to develop his nuclear weapons arsenal, and enable him to more effectively seek sanctions relief.”

“This is literally how the North Korean film ‘The Country I Saw’ ends,” he wrote on Twitter. “An American President visits Pyongyang, compelled by North Korea’s nuclear and missile programs.”

“Kim is not inviting Trump so that he can surrender North Korea’s weapons. Kim is inviting Trump to demonstrate that his investment in nuclear and missile capabilities has forced the United States to treat him as an equal.”