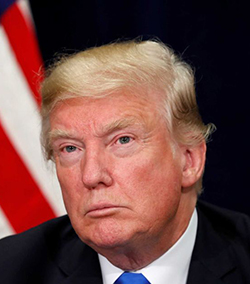 NEW YORK: President Donald Trump’s presidential campaign has been subpoenaed for records related to past sexual assault allegations against Trump — charges the president on Monday dismissed as “made-up stuff.”
Lawyers for Summer Zervos, a former contestant on “The Apprentice,” asked the campaign in March to preserve any records in its possession concerning Zervos or other women who accused Trump of misconduct. Zervos says Trump kissed and groped her against her will in 2007.
During a Rose Garden press conference, Trump dismissed the allegations as politically motivated.
“All I can say is it’s totally fake news — just fake. It’s fake, it’s made-up stuff. And it’s disgraceful what happens,” he said. “That happens in the world of politics.”
Zervos’ request was filed as part of a defamation lawsuit. Lawyers for Trump For President agreed in April to hold on to any related records. Those sorts of subpoenas are routine in civil litigation.
It isn’t clear yet whether the case will advance far enough that the Trump campaign will be required to actually turn over those records.
Trump’s lawyers have asked that the case be dismissed, or delayed until he is no longer president.
Three legal scholars who, 20 years ago, submitted a brief to the Supreme Court arguing that President Bill Clinton wasn’t immune from a sexual harassment suit filed by Paula Jones, filed a similar brief in the Zervos case last month.
The law professors, Richard Primus, of the University of Michigan Law School, and Justin Florence and Larry Schwartztol, of The Protect Democracy Project, said Trump also isn’t immune from the Zervos lawsuit.
“No one in our nation is above the law, not even the president,” they wrote.
A decision on whether the lawsuit can proceed is not expected for some time.Advertisement