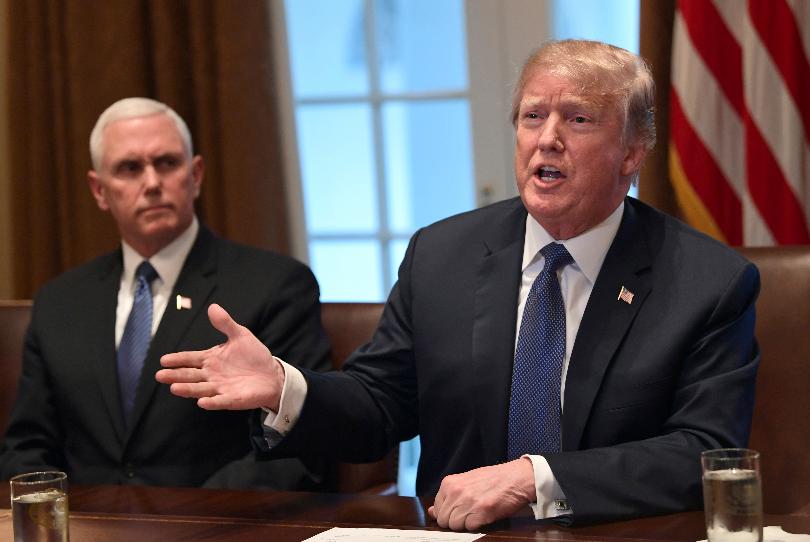 UNITED States: The White House on Tuesday insisted Donald Trump has the power to fire special prosecutor Robert Mueller, stoking fears that the president may try to kill an investigation inching ever-closer to the Oval Office.

“We have been advised that the president certainly has the power to make that decision,” said Press Secretary Sarah Sanders, after months of denying Mueller’s removal is under consideration.

The change in tone came as Trump reacted furiously to an FBI raid of his private lawyer’s offices on Monday.

Special counsel Mueller was appointed last May to investigate Russian efforts to tip the 2016 presidential election in Trump’s favor.

Over the last year he has increasingly dug into evidence of alleged money laundering, fraud and obstruction of justice inside Trump’s inner circle.

Now Trump’s long-time lawyer Michael Cohen — who holds secrets about many of the president’s personal and financial dealings — is in the crosshairs.

“I think that the president has been clear that he thinks that this has gone too far,” said Sanders.

Trump on Tuesday hunkered down at the White House, cancelling a first trip to Latin America that was due to start on Friday and stewing on a move that could throw America into a constitutional crisis.

At the same time, Trump faced a momentous decision about whether to carry out military strikes in Syria.

Trump has pledged to decide by the end of Tuesday how to respond to a suspected chemical weapons attack in the rebel-held suburbs of Damascus, blamed on the Syrian regime and its allies.

On Monday, the Republican leader promised that the “heinous attack on innocent Syrians with banned chemical weapons” would be “met forcefully.”

The Syrian regime and its backers in Moscow and Tehran have denied the Saturday attack took place, or suggested it was a “false flag” operation by rebels.

While much of his national security team spent Monday and Tuesday discussing whether strikes would be effective in deterring future chemical attacks, and how to limit the risk of escalation, Trump met his lawyers Jay Sekulow and Ty Cobb to discuss the Cohen raid.

His anger showed no signs of abating.

“A TOTAL WITCH HUNT!!!” the president blasted on Twitter amid news that FBI agents had seized documents pertaining to his dealings with Cohen. “Attorney–client privilege is dead!”

On Capitol Hill Republican and Democratic members of Congress urged Trump to allow Mueller to do his work.

“If the president is thinking of using this raid to fire Special Counsel Mueller or otherwise interfere with the chain of command in the Russia probe, we Democrats have one simple message for him: don’t,” top Senate Democrat Chuck Schumer said.

“The investigation is critical to the health of our democracy, and must be allowed to continue.”

Republicans said that would not be necessary, with Senate Judiciary Committee Chairman Chuck Grassley stating it would be “suicide” for Trump to fire Mueller.

After months of silence, Trump last week offered a flat “no” when asked if he knew about the payment.

Earlier, Tuesday began with a statement from Sanders that surprised even some White House staff, saying Trump’s upcoming trip to Peru and Colombia had been scrapped.

“The president will remain in the United States to oversee the American response to Syria and to monitor developments around the world,” she said.

Trump had already cut the visit short — from five days, to three and, finally, to none.

The combative US president had been expected in Peru for the Summit of the Americas, where he was likely to face protests and awkward meetings with leaders who have bristled at his repeated portrayal of Latino immigrants as rapists and thugs.

Vice President Mike Pence will represent the United States in Lima instead, his aide Jarrod Agen said, adding that he would also meet Venezuelan dissidents.

Trump is still expected to travel to his Mar-a-Lago holiday home in Florida on Monday, where a summit with Japanese Prime Minister Shinzo Abe will go ahead.