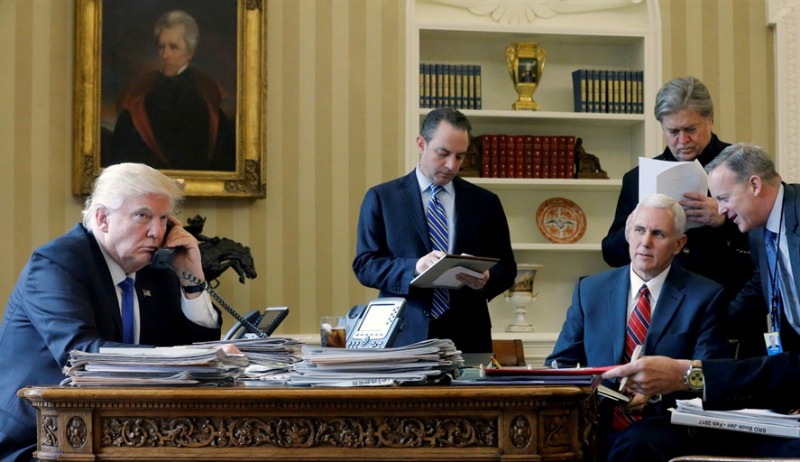 President Donald Trump reportedly has to be reminded of differences in time zones on a “constant basis” as he impulsively attempts to call other world leaders, a diplomatic source told Politico.

According to a former National Security Council official, Trump apparently isn’t “great at recognizing” that an older world leader might not be awake “or in the right place at 10:30 or 11 p.m. their time.”

A White House official said Trump is well aware of how time zones work, especially as someone who’s worked in international business for years, but is often too busy to be concerned with such details.

“He’s the president of the United States. He’s not stopping to add up” time differences, the official told Politico.

“I don’t think anybody would expect him or Obama or Bush or Clinton or anybody to do that. That’s the whole reason you have a staff to say ‘yes, we’ll set it up,’ and then they find a time that makes most sense,” the White House official added.

The president also reportedly “randomly” calls other world leaders without specific topics to discuss, leaving them confused as to why he reached out. Trump has a particularly “bizarre” interest in French President Emmanuel Macron in this regard, according to what one former national security official told Politico.

“[Trump] wanted to talk to him constantly … Macron would be like: ‘Hey what are we talking about?’ These are very busy people. You don’t just call to check in,” the official said.

A White House official claimed Macron has requested most of the calls with Trump.

Past presidents were also known to call their global counterparts at awkward hours, but Trump has reportedly consistently done so without fully preparing for their conversations, exhausting and annoying foreign aides and diplomats in the process.

Even when Trump does prepare for meetings or conversations with other foreign leaders, there’s apparently quite a learning curve. Trump, for example, allegedly referred to Nepal as “nipple” and Bhutan as “button” as aides prepped him for a meeting with India’s prime minister.

The White House defended Trump, however, and said he has “good rapports” with other word leaders.

“The president has developed strong relationships and good rapports that are not only friendly, but also allow for candid conversations with many of America’s closest allies,” White House press secretary Sarah Sanders told Politico.

Sanders added that Trump has “even worked the phone with our competitors” and claimed “foreign leaders appreciate that the president is willing to take their calls day and night.”

From Trump’s earliest days in the White House, there have been numerous reports of his struggles to follow diplomatic protocol and apparent propensity for awkward exchanges with foreign leaders.

Some of the more embarrassing conversations have been leaked, presenting Trump as an unpolished, brash leader. This is reportedly what inspired the White House’s recent decision to cease releasing public summaries of Trump’s conversations with world leaders.