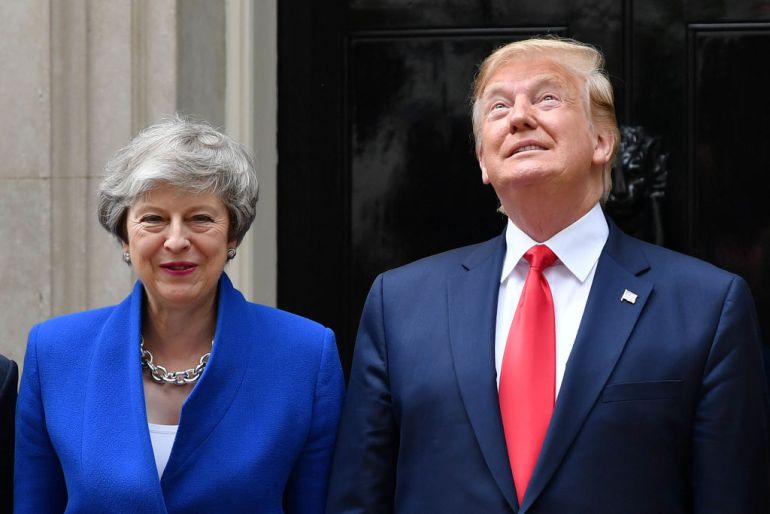 Theresa May and Donald Trump
Spread This News

US President Donald Trump said the US and UK have the “greatest alliance the world has ever known” in a news conference with Theresa May.

The prime minister said they had a “great relationship” that they should “build on”.

But they also “openly” discussed their differences, such as on climate change, Iran and China, Mrs May said.

Trump also said he turned down a meeting with Jeremy Corbyn, who addressed protesters in Westminster.

The Labour leader had proposed talks, saying he was ready to engage with the US president on issues such as climate change, threats to peace and the refugee crisis.

“I want to be able to have that dialogue to bring about the better and more peaceful world that we all want to live in,” Corbyn told the crowd of protesters.

When asked about Corbyn, the US president said he did “not know him, never met him, never spoke to him”, but added that he had turned down an opportunity to meet the Labour leader on a different occasion.

Trump, who is on day two of his three-day state visit, said Corbyn was a “negative force”.

“I really don’t like critics as much as I like and respect people who get things done – so I decided not to meet,” he added.

As the prime minister and US president paid tribute to the “special relationship”, Trump promised a “phenomenal” trade deal after the UK leaves the EU, suggesting it could double or treble trade.

Asked if the NHS would be included in post-Brexit trade talks, Trump said “everything is on the table”.

It comes after the US ambassador to the UK, Woody Johnson, last week told BBC One’s Andrew Marr Show, that he expected the “entire economy” – including the health service – to be part of a future deal between the two countries.

But May said any agreement between the two countries would follow talks about “what should or should not be in that trade deal for the future”.

Health Secretary Matt Hancock was among several Conservative leadership candidates to replace Theresa May who said they would not allow the NHS to become part of any trade talks. “Not on my watch,” he tweeted.