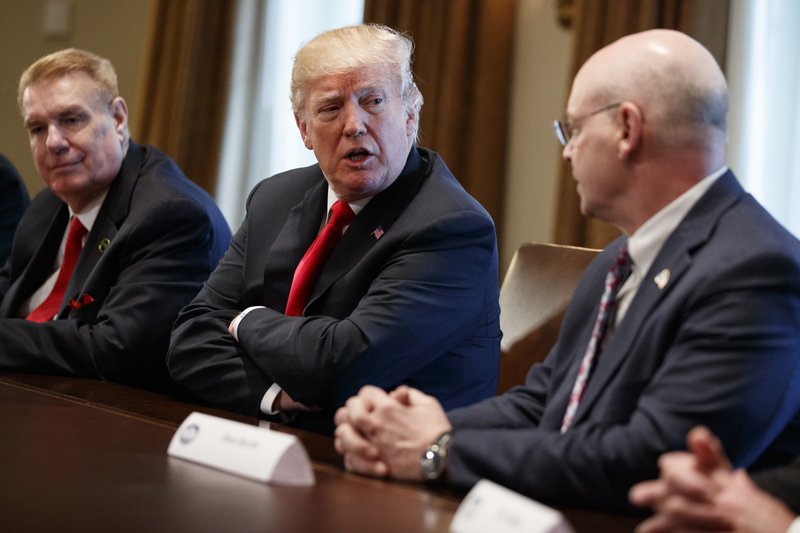 US President Donald Trump slapped steep trade tariffs on foreign steel and aluminum Thursday, drawing sharp protests from allies at home and abroad amid fears of a global trade war.

Signaling a sharp departure from a decades-long US-led drive for more open and less regulated trade, Trump declared that America had been “ravaged by aggressive foreign trade practices.”

“It’s really an assault on our country,” he declared, announcing the tariffs of 25 percent on imported steel and 10 percent on aluminum, which are used in everything from cars to construction, roads to railways.

Trump said the tariffs — which will come into effect after 15 days — will not initially apply to Canada and Mexico, and that close partners on security and trade could negotiate exemptions.

“Many of the countries that treat us the worst on trade and on the military are our allies, as they call them,” he complained.

One of those allies, Japan, hit out immediately at the announcement, saying the moves “could have a grave impact on the economic relationship of Japan and the US”, the world’s third and top economies respectively.

The world’s second-biggest economy, China, was also vocal in its opposition, deriding the tariffs as “a serious attack on normal international trade order.”

Top trading partners the European Union and Brazil also launched broadsides against the tariffs, which are worth billions of dollars.

Leaning on a little-used and decades-old national security clause in US trade law, Trump said he was fulfilling a campaign promise.

“I’ve been talking about this a long time, a lot longer than my political career,” he said. “We’ve been treated very badly by our past administrations, by presidents that represented us that didn’t know what they were doing.”

The mercurial 45th president compared his action to those of predecessors George Washington, Abraham Lincoln and William McKinley.

Regarding alumina and aluminum, Canada was also by far the largest supplier followed by China, Russia and the United Arab Emirates.

Trump had indicated he would be flexible toward “real friends,” and during the signing confirmed Canada and Mexico would be permanently exempted if the ongoing renegotiation of the North American Free Trade Agreement is successful.

But both Mexico and Canada rejected Trump’s linkage of the levies to ongoing NAFTA talks.

Canada’s foreign affairs minister termed the two things “separate issues” while Mexico’s economy ministry said “the negotiation of the NAFTA should not be subject to conditions outside the process.”

The US leader had also added Australia to a list of likely carve-outs, as a “great country” and “long term partner.”

But he singled out Germany for criticism, reviving a longstanding gripe that European NATO allies do not pay their fair share.

“We have some friends and some enemies where we have been tremendously taken advantage of over the years on trade and on military,” he said.

The EU’s top trade official Cecilia Malmstroem insisted the entire bloc “should be excluded” from the tariffs as a “close ally,” vowing to “seek more clarity” from Washington.

Britain, meanwhile, said it would “work with EU partners to consider the scope for exemptions outlined today,” saying “tariffs are not the right way” to tackle the problem of global over-capacity in steel.

Major producer Brazil immediately vowed to take “all necessary steps” in order to “protect its rights and interests” in response to the US move.

Last week Trump stunned the world — and his own aides — with an off-the-cuff announcement of his plan, even before White House lawyers judged the legality of the tariffs.

While the full economic impact remains unknown, the political fallout was swift with the top Republican in Congress Paul Ryan publicly denouncing Trump’s move, and vowing to push him to narrow its focus to “countries and practices that violate trade law.”

The European Union has promised tariffs on items from steel to peanut butter, bourbon and denim — most of which are produced in states that Trump needs to win re-election.

Even as Trump approved the tariffs, 11 partners in the Asia-Pacific were in Santiago, Chile, to sign a multilateral trade deal embraced by president Barack Obama but rejected by Trump.