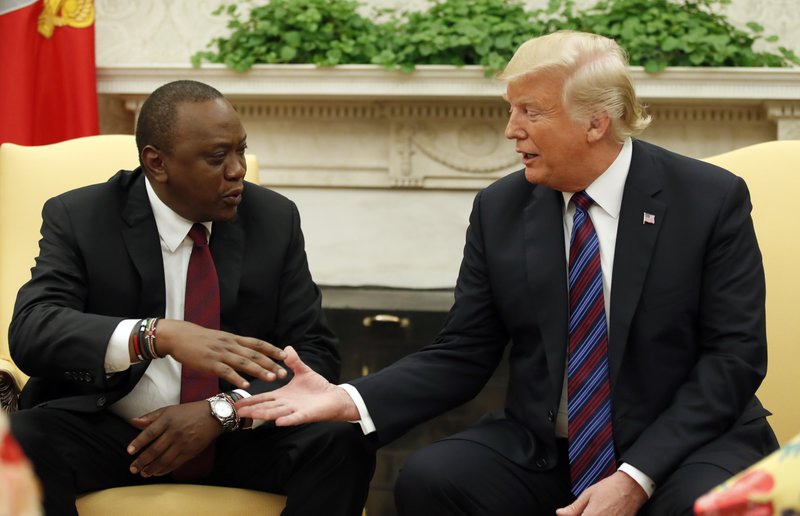 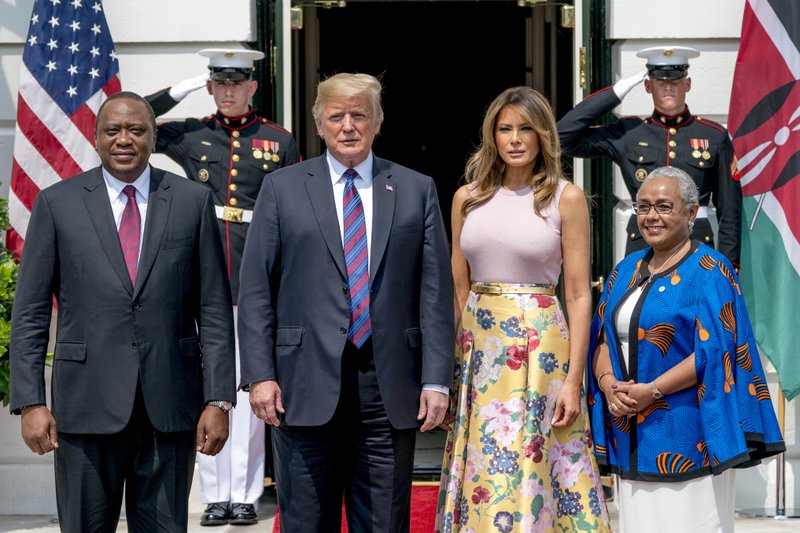 WASHINGTON: President Donald Trump on Monday welcomed the president of Kenya to the White House, where the two leaders talked trade, security — and Trump’s accomplishments.

Trump hosted President Uhuru Kenyatta as Kenya is emerging from a period of election turmoil. He’s the second African leader to meet with Trump at the White House, following a visit by Nigeria’s president earlier this year.

Trump has been criticised for paying too little attention to the continent and faced demands for an apology earlier this year after his private comments about “shithole countries” in Africa and other regions were leaked to journalists.

U.S. first lady Melania Trump, who helped welcome Kenyatta and his wife to the White House, is planning a solo trip to Africa this fall.

Trump and Kenyatta, during remarks to reporters in the Oval Office and Cabinet room, said they would be discussing a series of topics, including cooperation on terrorism and building trade and investment ties.

“Well, you were here on a very special day,” Trump told Kenyatta, adding: “Everything I said is going to happen, it ends up happening, so you picked a good day to come. We’re in a very good mood.”

Kenyatta said he hoped Trump would share the wealth with his country.

“We’ll bring that over to Kenya,” Trump joked.

Trump also pointed to what he called a “massive roadway” infrastructure project in Kenya as a sign of the countries’ ties. He appeared to be referring to the Nairobi-Mombasa Expressway project that would link Kenya’s capital with its major Indian Ocean port.

The head of the U.S. Overseas Private Investment Corporation met last month with U.S. construction company Bechtel in Kenya about the agency’s “ready support” for the project, which is seen by the U.S. as tool to compete with China’s sweeping Belt and Road Initiative in Africa and elsewhere. Last year Kenya opened a Chinese-funded railway between Nairobi and Mombasa that has been described as Kenya’s largest infrastructure project since independence.

But Trump did not respond to repeated questions about Sen. John McCain, who died Saturday at 81 after a 13-month struggle with brain cancer. Trump tweeted condolences to McCain’s family but has made no reference to the Arizona senator, with whom he had a bitter feud.

Kenyatta has been trying to bolster his image following a crisis in which Kenya’s Supreme Court overturned the August presidential election, citing irregularities, and the opposition boycotted the fresh vote.

Kenya is the third highest recipient of U.S. security aid in sub-Saharan Africa, according to the Security Assistance Monitor. Both Kenya and the U.S. have troops in Somalia, and the al-Qaida-linked al-Shabab extremist group has crossed the border to carry out dozens of attacks inside Kenya, calling it retribution for sending troops. Nearly 100 Kenyan police officers have been killed since May 2017 in bombings and ambushes.

The Kenyan leader is also meeting with U.S. business leaders to promote investment in his country while in Washington. He’ll host British Prime Minister Theresa May in Nairobi, Kenya’s capital, on Thursday.