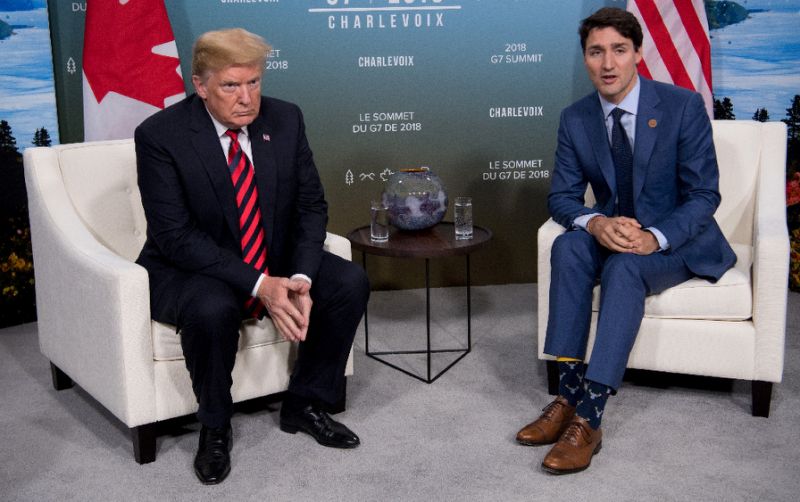 Trump and Trudeau at the stormy G7 summit
Spread This News

DONALD Trump’s spectacular bust-up with America’s closest allies at the G7 raises the already high political stakes for Tuesday’s summit with Kim Jong Un, and highlights the dangers of the US leader’s self-serving diplomacy.

Many analysts suggest Trump is perversely more at ease with traditional foes — contrasting his treatment of the likes of Canada’s Justin Trudeau to the red-carpet welcome he recently gave Kim’s right-hand man at the White House.

Former US ambassador to Russia Michael McFaul summed it up: “If Trump can’t negotiate a deal on milk with one of our closest allies, how is he going to get a deal on nuclear disarmament with one of our greatest foes?”

Heading into the G7 summit in Canada in characteristically bullish mood, Trump had promised he would pull off the sort of trade deal that only he, the world’s greatest dealmaker, could make.

It will be “easy”, said Trump, but the reality was anything but.

Despite diplomats’ best efforts, and unusual personal involvement from leaders huddling in alcoves and sunrooms of a chateau by the Saint Lawrence river, the draft communique was barely enough to paper over the cracks.

So each leader, Trump and Trudeau included, left the summit and went off to tell their publics how hard they had fought for the national interest.

Watching Trudeau’s press conference from Air Force One on his way to Singapore, Trump took umbrage at the Canadian leader’s voter-tailored message and angrily rejected the communique.

Only hours earlier, Trump had performed his own victory lap in front of the cameras, declaring the summit a success and America’s relations with its allies a “10” out of 10.

And faced with a choice between tarnishing his deal-maker credentials and throwing an ally under the bus, Trump’s choice was never in doubt.

“He was angry about Trudeau’s press conference,” said one aide, on condition of anonymity.

So his aides rushed to turn the tables on Trudeau, painting the quiet-spoken Canadian PM as a back-stabber and the cause of the breakdown.

“There’s a special place in hell for any foreign leader that engages in bad-faith diplomacy with President Donald J. Trump and then tries to stab him in the back on the way out the door,” said US trade advisor Peter Navarro.

A flight across the world later and Trump was in Singapore, preparing for an unprecedented summit with Kim that has raised hopes of bringing peace to the Korean peninsula.

Richard Haas, president of the Council on Foreign Relations think-tank, said the G7 meltdown had put more pressure on Trump to cut a deal with the nuclear-armed Kim.

“Trump will not want to bust up two summits in a row lest people conclude he is the problem,” said Haas, predicting a more pliable president.

It is “all about posturing and message-sending, not policy”, added Haas.

The White House rejected the notion that Trump was looking back at the G7 rather than forward towards peace.

“I doubt (the G7) will have any impact. They are unrelated buckets of issues,” a senior White House official said. “The overarching issues with North Korea heighten the need for a positive outcome.”

Of those two buckets, trade and North Korea, there is no doubt North Korea is a more complex problem -— touching on non-proliferation, the balance of power in East Asia and America’s treaty alliances.

But of the president’s six tweets since landing in Singapore, five were rants about trade and only one — “Great to be in Singapore, excitement in the air” — referenced the upcoming summit.

Many of the tough details in the North Korea talks are likely to wait for future rounds of talks at a lower level.

But Trump has once again put himself at the centre of negotiations, and in doing so, has tethered his political fortunes to the outcome.

“It is clear that Trump is eager to demonstrate to the world that he can make this work and accomplish what his predecessors failed to do,” said Julian Zelizer, history and public affairs professor at Princeton University.

The G7 bust-up shows how badly it can go wrong if he fails.