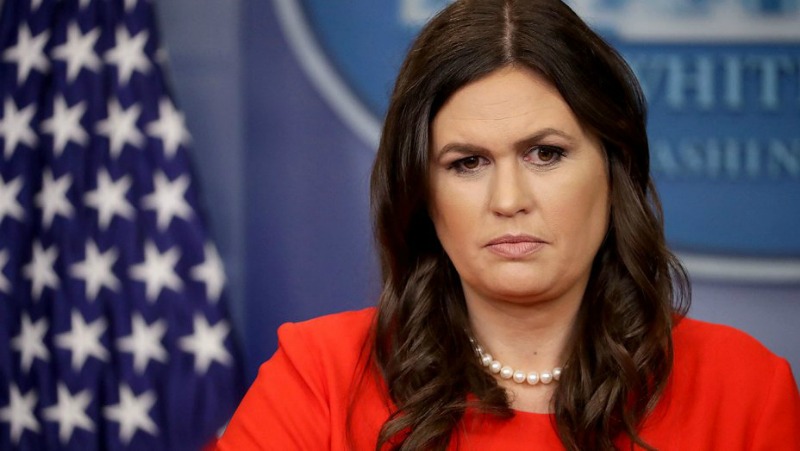 A Virginia restaurant was inundated with reviews from both ends of the political spectrum on Saturday after White House press secretary Sarah Sanders said its owner asked her to leave because of her job.

On Friday, a Facebook user claiming to be a waiter at The Red Hen in Lexington, Virginia – around 70 miles southwest of Charlottesville – said he served Sanders “for a total of 2 minutes” before she and her party were asked to leave.

His post went viral when Brennan Gilmore, a musician, activist and former US diplomat, uploaded a screenshot to Twitter alongside an image of a handwritten note which read “86 – Sara Huckabee Sanders,” supposedly from the restaurant.

To “86” someone is a slang term meaning to refuse to serve a customer.

“Last night I was told by the owner of Red Hen in Lexington, VA to leave because I work for @POTUS and I politely left,” Sanders tweeted on Saturday, confirming the incident.

“Her actions say far more about her than about me. I always do my best to treat people, including those I disagree with, respectfully and will continue to do so.”

Chef-owner Stephanie Wilkinson said that politics were especially explosive in her small town which voted against Trump in a county that did not.

Given her own moral position that the spokesperson serves in an “inhumane and unethical” administration, Wilkinson told The Washington Post, she could not accept a defender of the president’s “cruellest policies”.

Last night I was told by the owner of Red Hen in Lexington, VA to leave because I work for @POTUS and I politely left. Her actions say far more about her than about me. I always do my best to treat people, including those I disagree with, respectfully and will continue to do so

‘Not a fan of confrontation’

“I’m not a huge fan of confrontation,” Wilkinson said.

“I have a business, and I want the business to thrive. This feels like the moment in our democracy when people have to make uncomfortable actions and decisions to uphold their morals,” she stressed.

The owner said many of her employees were gay and that Sanders had defended Trump’s wish to bar transgender people from the armed forces. And then, she said, she was stunned by the spokesperson’s defence of Trump policies leading to migrant children being taken from their parents’ care.

“I explained that the restaurant has certain standards that I feel it has to uphold, such as honesty, and compassion, and cooperation,” the owner explained.

The restaurant continued to be flooded on Saturday afternoon with five-star online reviews praising the restaurant’s stance – and one-star reviews accusing the owner of “discrimination”.

“Sarah, you’re a class act. I’m so sorry you were treated this way,” was State Department spokesperson Heather Nauert’s response on Twitter.

It comes after US Secretary of Homeland Security Kirstjen Nielsen was heckled as she dined at a Mexican restaurant in Washington on Tuesday.

Protestors chanted “shame! shame!” repeatedly at Nielsen, a frontline defender of the Trump administration’s practice of separating migrant children from their parents, until she left the restaurant.

Two days earlier, according to the New York Post, White House adviser Stephen Miller was branded a “fascist” while dining at another Mexican eatery in Washington.