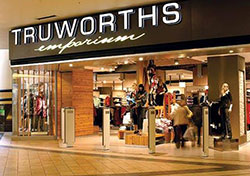 CLOTHING retailer Truworths reported a 20 percent increase in retail sales in the 11 weeks from its July 12 year-end but struggled in the year leading to that, with revenue and profits tumbling in a tough business environment.
Revenue declined slightly from $23,8 million in the 53 weeks to July 12 to $23,1 million while the group’s profit also tumbled to $89,000 in the period under review from $354,000 recorded in the previous comparable 52 week period.
“The gross profit margin decreased from 50,5 percent in 2014 to 47,2 percent as a result of the introduction of the homeware range  which carries a lower margin.
“The group’s trading expenses, excluding debtors costs, decreased by 8,5 percent. The operating margin decreased from 2,2 percent in the prior year to 0,7 percent,” the company said on Wednesday.
It said it will continue to focus on the management of trade receivables to ensure improvement and enhance the quality of its book and cash flows on the back of deteriorating consumer and credit environment.
“The business will continue to manage operating costs productively and manage working capital levels in line with the current trading levels,” it said.
One of Zimbabwe’s biggest fashion retailers, Truworths, noted that trading conditions were tough and was expected to remain so for rest of the year, although it expects to report satisfactory growth in the current financial period.
Zimbabwean retailers have been struggling to maintain profit growth, competing with second hand imports which are flourishing despite a government ban as well as reduced household spending.
Truworths – the holding company for Truworths Man, Topics and Number 1 chains – did not declare a dividend in the period under review.Advertisement