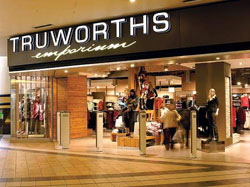 HARARE: Clothing retail chain, Truworths widened its loss after tax by 73 percent from $1 million to $1,7 million in the full year to July weighed down by a 24 decline in revenue.
Revenue amounted to $14,8 million from $19,6 million in the prior period as Sales declined by 29 percent to $12,2 million.
Sales for the group’s chain stores , Truworths and Topics, were down 7,1 percent and 6,3 percent respectively in the second half. Number 1 stores was the only unit to recorded a growth in sales at 16, 5 percent.
“In line with the deteriorating economic conditions, net bad debt was higher than the prior year with write off increasing by 121 percent and recoveries reducing by 62 percent,” said chairman Christopher Peech.
“The allowance for doubtful debts increased by 22 percent”
Gross profit for the group decreased by 40,2 percent as product was discounted to stimulate sales in the first half of the financial year.
Cash generated from operations increased to $1,4 million from $24,221 previously.
Total assets are down from $18, 2 million to $15,8 million. The company did not declare a dividend.Advertisement