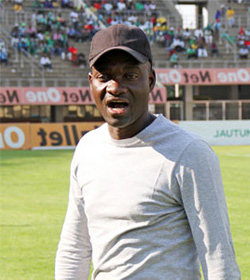 PREMIERSHIP: Tsholotsho FC coach Lizwe Sweswe has declared war on league title chasers FC Platinum, whom they host at Luveve Stadium on Saturday.
Tsholotsho stand in the way of FC Platinum’s glory of a first ever league title.
If the platinum miners win Saturday’s match, they would be crowned champions but, would now need leaders Caps United who lead them by two points, to draw or lose against Chapungu.
Tsholotsho have endured a torrid season, that has seen them being relegation favourites.
They are now aiming to finish the season third from bottom and then pray that Zifa agree to have two teams, instead of four being demoted to the first division.
“To us we have a very important match to play on Saturday. We do not want to concede that we have already been relegated,” Sweswe said.
“We know what is at stake for us and we need maximum points. So we will give it our best shot and make sure we win. We will not do any favour to anyone. Of course we are playing a team that is fighting to win the league title and that is what is going to make this match tough. But we are ready for them.”
If Tsholothso get relegated, that would end their two-season stay in the PSL.Advertisement