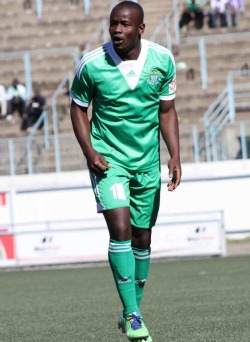 CAPS United wasted countless chances and allowed visiting Tsholotsho to steal a point in a Castle Lager Premiership tie which ended in a 1-1 stalemate at the National Sports Stadium on Thursday.
The Harare giants went into the match seeking their second consecutive win which would have catapulted them to fifth position on the league table but they were let down by poor decision making in the final third.
Dominic Chungwa was the chief culprit despite scoring the only goal for Caps United on 40 minutes through a headed goal from winger Phineas Bhamusi.
The draw left the Green Machine on seventh position with 29 points- eight behind log leaders Chicken Inn while Tsholotsho moved to 12th position with 17 points.
Caps United dominated the match for long periods in the first half, with Tsholotsho appearing content with soaking the pressure.
The hosts launched some fine raids in their opponent’s goal and Leonard Tsipa had the ball in the back of the nets seven minutes into the match but it was ruled for offside.
Tsholotsho had opportunities too with Nixon Gama coming close on 18 minutes before forcing goalkeeper Jorum Muchambo into a fine save in two minutes of added time in the first half.
In the second half, Caps United continued to threaten but Tsipa missed his effort with the goalkeeper to beat.
But it was Chungwa who missed with a wild effort on 71 minutes with Tsholotsho goalkeeper Nickel Marichi a beaten man.
Tsholotsho substitute Tafadzwa Jaravani, who came in for Simbarashe Gorogodyo, levelled the scores a minute later to spark wild celebrations from the visitors.
Caps United coach Mark Mathe expressed disappointment with his team’s poor finishing.
“It was clear Tsholotsho’s game plan was to get a point and we wasted so many chances. We need to call a spade a spade, they are paid to score goals and they should be scoring. Even the midfielders and defenders should score.
There was too much experiments instead of just sticking to basics. There is no good or bad goal. We should have covered ground but I think with our top four target we are still there, the players need counselling going into the next match, They need to win matches,” said Mathe.
His counterpart Lizwe Sweswe was happy with the result.Advertisement

“It’s good to collect a point away from home especially against Caps United. We are going to try by all means to ensure we survive relegation.
Our target was to collect four points against Triangle and Caps United and now it means we have to collect three points against Dynamos who we face next,” said Sweswe.
RESULTS
Wednesday: Buffaloes 0-2 Chicken Inn, Triangle 0-2 Dynamos, Hwange 3-0 Whawha, Dongo 0-0 Flame Lily, Chapungu 1-1 Harare City, ZPC Kariba 1-1 How Mine
Thursday: Highlanders 1-2 FC Platinum, CAPS United 1-1 Tsholotsho FC