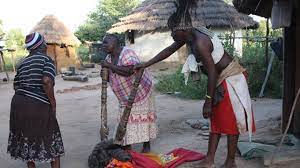 Spread This News
By Tonderai Saharo
A Self-styled traditional healer, commonly known as Tsikamutanda, is reportedly on the rampage in villages under Chief Nhema in Zaka, sexually abusing  under age girls and demanding livestock from their poor parents in a development that has angered the community and asking for government intervention.
The Tsikamutanda, who is operating in Muramba, Matara and Chiredzana villages  in Zaka East is said to be demanding property, including household items, livestock and as well as money, after a purporting to have conducted successful cleansing ceremonies at their homesteads in which he would have exorcised spirits of witchcraft and casting away goblins planted by their enemies.
The rampaging traditional healer, villagers say, is not only is reaping them off, but is now also in the habit of  demanding sexual favours from female clients, who include minors and married women.
“This tsikamutanda is also bedding married women and underage girls in the village in exchange for money and meat. In one of the cases, he slept with and impregnated a Grade 6 girl who is staying with guardians. After sleeping with the young girl several times in the mountain, the tsikamutanda then called the child’s guardians where he was with the child and told them that he wanted the girl to be a wife of his spirit mediaums, and gave them three cattle and money. He is also sleeping with many young girls in the area,” said an angry villager
Chief Nhema, born Rangarirai Bwawanda, said he was   aware of the issue and have already made arrangement with the police to stop the Tsikamutanda for operating in the area.
“Arrangements were made with the police and Headman Chamburukira to stop the Tsikamutanda from operating in the area. I am told the Tsikamutanda is  collecting  cattle and properties from villagers, leaving some families there poorer as livestock is a sign of wealth in rural communities, Chief Nhema said in an interview with NewZimbabwe.com Tuesday.
However  a visit to the area  revealed a different a story as most villagers  believed the Tsikamutanda is working hand in glove  with some of the traditional leaders.
Villager who spoke  on condition of anonymity for fear of victimisation said despite the current covid-19 restrictions that ban gatherings, people are seen gathered and singing for him at his shrine near Matara police base
“Due to the increase in number of livestock he has collected from villagers, he has employed six shepherds to look after the herd. Poor villagers are now struggling with hunger. So far he is now selling some of the livestock and villagers were threatened that if they share photos of him or his name, they will encounter untold misfortune so they have been suffering in silence for months,” said one villager, in an anonymous alert to authorities.
Villagers are  now worried that, if the tsikamutanda is not stopped, he will continue with his illegal activities, dividing families, abusing women and young girls and stealing livestock and household items in the name of a  cleansing ceremony.
“This tsikamutanda must return all the livestock he has taken from villagers, as well as other household items and money, and he should also be arrested for breaking lockdown regulations, breaking the Witchcraft Suppression Act, and for sexually abusing minors, which is criminal behavior,” said one villager.