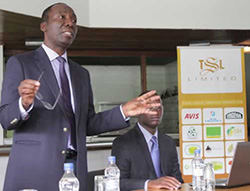 AGRO-INDUSTRIAL concern TSL Limited has recorded a 19 percent increase in revenue to $48 million for the year ended October, 2014 but poor performance by associate companies weighed down the group’s overall performance.
Hunyani Holdings in which the company held a 40 percent stake was incorporated into a new entity, Nampak Zimbabwe comprising of Canauld Metal Box and Mega Pak with the profit contribution of the investment to the group falling below prior year.
Operating profit grew four percent before fair value adjustment while profit after tax declined to $4,9 percent from $6,8 million in 2013.
The company’s chief executive, Washington Matsaira told analysts during a recent briefing that the group’s revenue had been negatively affected by poor performance in associate companies – Cut Rag Processors and Nampak Zimbabwe.
“The four percent growth is a satisfactory result,” he said, adding that the associate companies “have failed to deliver,” and that TSL had no direct control over their operations.
“Both our associates did not post the sort of contributions we expected and they contributed to the drop in profit before tax,” he said.
The market challenges facing the cigarette manufacturing industry had resulted in Cut Rag’s trading performance falling below expectations although positive results were expected when the trading environment improves.
The group’s operating profit was up four percent to $7,3 million while its  profit after tax  declined to $4,9 million compared to $6,8 million in 2013.
Turning to the tobacco operations, Matsaira said production during the period under review was 50 percent up to 3,6 million kg.
The real estate business had also registered growth driven by strong demand for warehousing space with third party tenancy improving by eight percent to 33 percent.
The group is planning to establish an industrial park at its property near the Boka Tobacco Auction floor which is expected to be completed in five years.
Bak Logistics recorded a seven percent growth in revenue, mainly in the general cargo and distribution divisions with plans underway to venture into rail transport.
“We completed a pilot project on rail transport and are quite optimistic it is an opportunity for our business,” Matsaira said without elaborating.Advertisement

He said under the pilot project the company had successfully transported 20,00 tonnes of fertiliser.
The group was also looking for partnerships with international logistics companies with a focus in the SADC region.
“We are at various stages of discussion with big international players and our desire is that any alliance we go into should give us a regional footprint. We are also in discussions to acquire a complementary logistics business and we are at a fairly advanced stage,” he said.
Going forward, he said, focus would be on building the logistics, agriculture, real estate and trading divisions as they had huge opportunities for growth.
In the agricultural division, the group will focus on export and value addition projects.