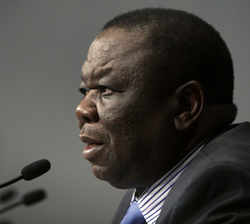 Prime Minister Tsvangirai’s address to the SADC Extra-ordinary summit in Maputo
Your Majesty, King Mswati, Your Excellences
YOUR Excellency President Guebuza, let me on behalf of my delegation express my profound gratitude to the wonderful manner in which we have been received and the warm hospitality which the people of Mozambique have showed from the day we arrived.
Let me also appreciate and thank all of you for your continued real interest and stewardship of the Zimbabwe crisis notwithstanding your busy schedules in your own countries.
I know that the people of Zimbabwe appreciate this great spirit of Pan African solidarity.
Your Majesty, Your excellences, you have been vested with the Zimbabwean matter since your historic summit in Dar Es Salam.
Since then we have travelled from Pretoria, Sandton, Mulungushi, Cape Town, Kinshasa, Windhoek, Livingstone, Luanda, Maputo, and in all these meetings you have been very clear on the following:

The need to create conditions for a free, fair, credible, legitimate election in Zimbabwe in which the people of Zimbabwe are free to elect a government of their choice;
In particular the summit in Luanda urged the parties to create a road map that sets out the relevant signposts and time frames that will lead to the above free and fair election
The need for Zimbabwe to pursue sustainable economic recovery and indeed the ending of all sanctions on Zimbabwe;
The need and obligation to find a lasting solution to the Zimbabwean situation that will allow Zimbabwe to take its place in Sadc, the African Union and the rest of the international community;

Mr. Chairman, your Excellences, it was through your committed stewardship that we signed the GPA on 15 September 2008. When we signed up to this agreement, we made a declaration of commitment to work together in an inclusive and consultative manner in order to resolve once and for all the Zimbabwe crisis.
Your Majesty, your Excellences, in the last four years of our government, we have no doubt demonstrated our bona fide commitment to the GPA and to the cause of making the agreement functional to the best of our abilities.
I, as Prime Minister, left no stone unturned to ensure that the government was functional and that everyone fulfilled their obligations under the GPA.Advertisement

Sadly, Mr. Chairman, the last four years have been a painful transition characterised by the absence of a genuine partner to the cause, a period which saw unilateral decisions being made, agreements not being fulfilled, U-turns on agreed positions and at all material times constant and vicious media attacks on my person, my government Ministers and my party.
The only reason why we continued to hang in there was our desire to serve our people and to respect your directives and resolutions as SADC.
Mr. Chairman, we have always insisted that we do not have an honest and genuine partner. This has now sadly been further vindicated by President Mugabe’s unilateral and unconstitutional proclamation of the election date on 31 July 2013.
Your Excellences are all well aware that in terms of our Constitution the President in consultation with the Prime Minister must make any executive decision.
What saddens me, Mr. Chairman, is that in the last four years, the two of us, despite our challenges, have done great things for our people. The things that we have done well including the ushering in of a new Constitution for Zimbabwe, we have done together as a collective.
Where unilateralism has been present, there has been no delivery and no result but acrimony and a waste of valuable time, including, at times, your own time. Thus, things we could have resolved together end up being everyone’s problem. This is regrettable for, indeed, we are capable of working together.
The unilateral proclamation, Mr. Chairman, Your Majesty, Your Excellences, has the effect of reversing all the work you have done on our behalf and your resolutions including at Sandton in 12 June 2011, Livingstone on 31 March 2011, Luanda on August 18, 2011 and 1 June, 2012.
In addition, Mr. Chairman, the proclamation also infringes on our Constitution and electoral laws. I will give two examples.
Firstly, you will recall that our Constitution provides for a 30-day period for intensive voter registration, which started on 10 June and is scheduled to end on the 9th of July.
By calling for the sitting of the nomination court on 28 June, this effectively prematurely ends the intense voter registration exercise by the 27th of June 2013.
Secondly, despite the fact that our Parliament is still sitting until 29 June 2013, President Mugabe has proceeded to pass an unlawful decree enacting on his own amendments to the Electoral Act.
Our Constitution makes it very clear that only Parliament makes our laws. The issue is, why should President Mugabe purport to make a law when Parliament is still there-a Parliament which in the past has fast-tracked important legislation including the new Constitution when the need to do so existed.
Mr. Chairman, once a proclamation has been made, our Constitution is clear that no further amendment to any laws that have a bearing on that election can be made.
The unfortunate situation is that the legislative reform agenda which you have insisted on and which parties have agreed on in the roadmap can now no longer be done and yet it is clear that a number of things still have to be done.
Only last week on Tuesday, our negotiators in the presence of the facilitation team, agreed on reforms pertaining to the media, the security sector, legislative reform and a roadmap pertaining to the voter registration process. This we expected to have been implemented jointly as quickly as possible. But alas we are now settled with a unilateral proclamation.
Mr. Chairman, as far as my party is concerned, it is critical that the roadmap as originally agreed and re-agreed be implemented. On this roadmap, the following are key issues:

The parties have agreed a five-pronged approach which includes a 30 day voter registration period to be followed by voters roll preparation, inspection, final compilation followed by signing off by the political parties.

The parties through the usual channel of their negotiators should easily agree the timing of the other processes without time frames.

The timings are a precondition and indeed a key determinant of the election date.

Media reform
On this issue, the parties long ago agreed to appoint new boards for the Mass Media Trust, the Zimbabwe Broadcasting Corporation and the Broadcasting Authority of Zimbabwe. This can be done immediately.
Security sector
The parties agreed that the security services commanders must issue a public statement reconfirming that they would uphold section 208 of the new Constitution and respect the will of the people after the next election. Work on a code of conduct can begin immediately and a draft already exists.
Alignment of laws
In addition to the Electoral law, we also need to align other laws to the new constitution such as the Public Order & Security Act, Access to Information & Protection of Privacy Act, Defence Act and the Police Act. On these I am reliably informed that both the facilitation team and the negotiators have exchanged proposals on the same Your Excellences, the above processes require both time and political will.

Court judgement
Mr. Chairman, a lot has been said about the Constitutional Court judgement. I want to assure you that I believe in the rule of law and respect the court judgments. However, let us not be distracted by it in resolving the political problems facing Zimbabwe which require political solutions.
May I state that, the court judgement is not immutable. In the very recent past, faced with the similar situation, President Mugabe with my support has gone to court on two occasions this year, pushing for the deferment of bye- election dates set by the courts.
I have no reason to doubt that if President Mugabe with my support makes an application seeking for the deferment of the date set on the good grounds we have, the court will listen to us.
The Constitutional court judgment is not therefore cast in stone and should not be used as an excuse to scuttle the necessary reforms that will achieve our shared goal of a level political playing field for a free and fair election.
Apart from making the Constitutional court application, I believe that as soon as Tuesday next week, our Parliament should sit to consider the Electoral Act so that we don’t break our own laws.
Mr. Chairman, the issue of elections is not a legal issue, but a political process issue. The GPA and the inclusive government are products of a political solution to a political problem and that problem is not going to be solved by a purely legalistic approach.
Mr. Chairman, the roadmap I propose is possible and can be done so that Zimbabwe can have a free, fair and legitimate election, bearing in mind that no party can be forced to participate in an election it knows will not be free, fair and legitimate.
Your Excellences, I make these propositions with a view to avoiding contestation over the legitimacy of this election which recent actions have already caused.
I thank you.