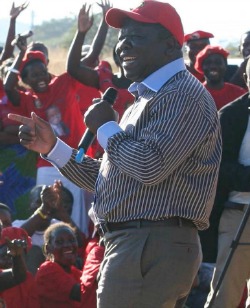 IT is no secret that the emperor has been running naked for a while now, but what is shocking is that he is beginning to dance in full public view and making a travesty of opposition politics in the country. From the lurid sex scandals to the recent orgies of violence and corruption reportedly rife in his party, Tsvangirai’s tragicomedy cannot be ignored as it epitomizes the rot that has slowly, but progressively eaten into the heart and soul of the main opposition party in Zimbabwe.
Since the MDC split in 2005, Tsvangirai’s misdemeanors have clearly developed into a cancerous plague that has dealt a fatal blow to the moral and ethical justification for opposition politics, especially in relation to how it imagines democratic leadership that is consistent with good governance and human rights. Needless to say, Tsvangirai’s leadership style and his increasingly wishy-washy political persona that is now characterized by perennial flip-flopping, calls for an urgent and serious reflection from all serious- minded citizens about the value, meaning, and direction of opposition politics in the country.
One doesn’t need a rocket scientist to show that the value, substance, and relevance of opposition politics in Zimbabwe has largely been on the decline since the formation of the GNU in 2008. Looking at this issue from the lens of the MDC-T as the main opposition party – albeit quantitatively and not qualitatively- Zimbabweans have perhaps seen that the party has become no more than just opposition for opposition’s sake. Apart from its usual neoliberal sound bites, it lacks transformative agency and a clear serious message to the electorate.
While MDC-N, for example, enjoys relative clarity of vision and policy, Tsvangirai’s MDC-T has since 2008 only filled the national political space with political gibberish on democracy that has no clear material value to the electorate. In the meantime, while the party elite have been enjoying the trappings of power and obscene consumption as seen through Tsvangirai’s endless “Pick and Pay” marital escapades, ordinary people have been starving. Hence, the recent trumping of the MDC-T by Zanu PF in the 2013 elections may in part, be as a result of a protest vote by citizens calling for Tsvangirai’s recommitment to a kind of opposition politics that can usher a new civic vernacular that is grounded on a value system that is different from that of Zanu PF.Advertisement

Sadly, Tsvangirai is not listening; he will never do. He is a naked emperor who is now  dancing out of tune.  He shows no leadership potential to be a doyen of democracy and human rights which he now flouts with reckless abandon in his party. It’s now public knowledge that his leadership has, for a long time now, been associated with an obnoxious, detestable, and disgusting culture of violence. In 2005, for example, apart from his alleged propensity to disregard party consent building mechanisms and their subsequent collective outcomes, violence was cited by Welshman Ncube as one of the main reasons for the split. Then as now, violence in the MDC appeared to take a sporadic and roguish form, albeit used systematically by the emperor to discipline and punish dissent and free expression on party issues.
Even more disturbing are the recent reports to the effect that this violence sometimes took an ethnic dimension reminiscent of the sunset kind of politics associated with Zanu PF. If indeed these claims are true, then it is more than crystal clear that Tsvangirai is yet another atavistic primordialist who has dismally failed to build a national identity that is premised on civic virtue, equity, and human rights as its nation building blocks. Give him the presidency after Mugabe and he will be a definite gift of death to the nation because he’s no respect for cultural and political diversity in his own party.
His failure to imagine a radically different democratic alternative for Zimbabwe can also be seen in the continued use of violence as evidenced by the recent bashing of Elton Mangoma and roughing up of the party’s Secretary General, Tendai Biti. Their sin is that of exercising their legitimate and hard won constitutional right to freedom of expression on what Zimbabweans would surely agree are salient party issues worth of public interest and concern.
Having lost the election countless times to Robert Mugabe, surely it must be healthy to discuss the succession question in the MDC-T but those who dare do so have been met with violence and shown the exit door. This use of intimidation and violence by the MDC-T is not consistent with opposition politics. Violence in the party can no longer just be regarded as merely sporadic, but is now structural and systemic. It has become part of the party political fabric and serves to undermine a democratic conversation in the party. This intra-party violence sets a very dangerous precedent for opposition politics in Zimbabwe because it undermines the democratic culture that is often regarded as the driving force for opposition politics.
The respect for human rights and democratic interaction must be a foundational pillar for any democratization and social justice project in Zimbabwe. Opposition as a form of politics must be about principles not principals. It is not about removing Mugabe from power, but removing bad leadership principles that have stalled Zimbabwe’s human rights and democratization progress.
Opposition politics is fundamentally a practice of freedom and must stand opposed through its values systems to those in power. The respect for the individual right to free expression on anything about party welfare in the MDC-T must remain sacrosanct. The use of violence is not only a violation of the founding principles of the MDC movement, but also a flagrant insult to the democratic character and strategic intent of opposition politics.
Dr Last Madiwa Moyo is an academic and researcher currently based in Ethiopia. He can be reached at lastmoyo@yahoo.com.