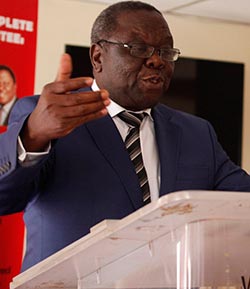 FELLOW Zimbabweans, we have come to the end of yet another tough year and we are five days away from celebrating the birth of Christ. I have travelled throughout the country in the past few months. I have met workers, young people, and women, members of the clergy who told me their anxieties and frustrations but more tellingly about their betrayal through the brazen electoral theft of July 31.
I have met our hard working civil servants, vendors, cross border traders, students and university graduates who all told me of their grievous concern that the current administration does not seem to know and care about their sad predicament and what they expect from a caring leadership.
This is the time that we usually gather as families not only to remember Christ but to enjoy the festive season, to share gifts and to show the value of love of one another through Christmas gifts and presents.
I am fully aware that that this is certainly going to be a bleak Christmas with little or nothing to share. We are faced with a government that has fully abdicated its responsibilities to the vagaries of the economic weather, allowing the winds of fate to drift the nation state to whatever plight and economic destination.
We all can see that we are alone as individuals and as families because nobody in government seems to understand our plight and the interventions that are required  for us to have some semblance of normalcy and decency in our lives.
The State of the Nation
As I said I have travelled across the country; from Chivi in Masvingo to Mabvuku in Harare. The nation is largely in a dire state with indicators pointing to a nation on quick strides to return to the chaos and collapse of 2008. Hunger is stalking the nation while food and farming inputs are being distributed selectively and continue to be used as a political weapon.
There is a serious liquidity crunch which has led to cash riots, including at a bank owned by a Zanu PF Minister where riot police had to be brought in to silence the genuine demand by innocent civil servants who simply wanted to access their cash. Government workers have not been paid their bonuses while the Zanu PF leadership has had to borrow money to pay salaries, further plunging the economy into financial doldrums because it does not make sense to borrow for recurrent expenditure.Advertisement