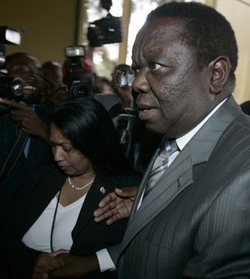 A LOT has been written and said about the role of security sector in Zimbabwe before, during and post elections. Although the new constitution that came into effect on May 22, 2013, demands neutrality of the army and the police, the public pronouncements by the generals and police commissioner leave many outside President Robert Mugabe’s party wondering if the army is prepared to not only accept but protect a democratic will of the Zimbabwean electorate, in the event that Zanu PF loses elections.
There is no doubt that Prime Minister Morgan Tsvangirai and his MDC-T party are worthy challengers and despite flip flopping, abusing the goodwill of the people and failing to deliver in the unity government especially considering corruption by MDC councillors and Tsvangirai’s compromising private issues with women.
The reasons are clear. The majority of Zimbabweans see Zanu PF and Mugabe as a liability in reviving brand Zimbabwe and re-connecting as a respected partner among the community of nations. So it is still possible for Tsvangirai to be the chief beneficiary of the protest vote or the “Let’s remove Mugabe and deal with Tsvangirai later” mantra.
Many Zimbabweans look at the attitude of the army generals who have consistently argued that Tsvangirai does not meet the test of patriotism and is not worth their salute in disgust. The perception may be that Tsvangirai, in choosing not to fight in the war of liberation, in aligning with the displaced white farmers and in relying on the support of the West and former colonial power, Britain through sanctions, he worked “against national interests.”
I am one of those who believes that the security sector should at all times unconditionally be subordinate to the civilian leadership. I still want to think that this will still be the case whatever the outcome of Zimbabwe’s next election. The question is how this can be possible if Tsvangirai was on the winning side.
A chance meeting with a professor of African history recently gave me insight into a different thinking. Let me call him Professor Really? With the question mark to symbolise that I still doubt his thesis.
I got talking to Professor Really by chance at some European Airport recently when both our planes were delayed. After some long philosophical exchanges, I must have sounded emotional and frustrated when I pointed out that there was no way the army generals in Zimbabwe were justified in their public “partisan” positions.Advertisement

Professor Really? looked at me long and hard and asked if I had heard about Idi Amin Dada of Uganda. We both agreed Idi Amin’s human rights record was one of the worst in history. The good professor was eager to tell me why he wanted to talk about Idi Amin and my Prime Minister in the same paragraph.
Prof Really reminded me that Idi Amin deposed Milton Obote in Uganda with the support of the West and his advisers were from Israel and Britain at the time. He had worked for the colonial British army in Kenya and other places. Obote on the other hand was socialist and aligned to the Soviet Union. It was during the Cold War. Amin therefore had the sympathy and support of the West.
Within a short time however, Amin declared war on Israel and deported Indians and Israelites from Uganda. He started training an army that he said would be used to invade Israel through the Golan Heights. He even invited French journalists to witness the drills. He clashed publicly with the British and sought to embarrass Prime Minister Ted Heath by doing a collection of goats and chicken to “feed the British” during economic challenges. He asked the British advisers to leave and continued with untold human rights abuses in his homeland.
Idi Amin was only removed from power years later when Tanzania, under President Julius Nyerere, retaliated to Ugandan invasion. He fled to Saudi Arabia where he died a few years ago still calling himself the Conqueror of the British Empire and the last King of Scotland.
“What is the point?” I rushed the Professor before the flight notice board changed to “Boarding.”
The professor replied: “You should realise that the British have learned their lessons and will never invest their interest in someone that may turn against them.”
He went on to explain that Zimbabwe had one of the strongest armies in Africa. It is possible that Tsvangirai is a difficult person to trust with such a strong security sector.
I said I will not believe him till the cows and chicken come home but he said something about France and allies spending billions to ensure Mali has a strong army and that the West no longer wanted to send their own sons into foreign land after Iraq and Afghanistan.
“It’s not true that the West would want a weak Zimbabwe army,” the professor said with a winning grin, before he disappeared behind security gates.
A few minutes later, I saw his plane fly off as I reflected on our chance conversation. I thrive on being positive. Every challenge has an opportunity. First, I do not think the talk about security sector reform is about the fear of an imaginary dictatorial President Tsvangirai. However, I think Tsvangirai has an election fix at his disposal. That answer is Dr Dumiso Dabengwa, the person and leader of ZAPU.
Dabengwa is arguably one of the best combat credential in Zimbabwe today. He fought and led the liberation struggle for many years. Together with the late Josiah Tongogara, Dabengwa was in charge of security sector reform at the Lancaster House negotiations that have birth to an independent Zimbabwe.  He recruited and remains a highly respected commander by most of the generals who are refusing to salute PM Tsvangirai. An election pact with Dabengwa will give that presidency the gravitas it may otherwise lack.
The other challenge for PM Tsvangirai has been the inability to be effective in the ministry of Home Affairs. Dabengwa was minister of Home Affairs for almost 10 years. This time coincided with the best peace and adherence to law and order in Zimbabwe. It can be argued with evidence, that during Dabengwa’s time at the Home Affairs ministry, the police force was a professional pride of the SADC region.
PM Tsvangirai is not trusted by the people of Matabeleland especially when it comes to their manifesto of wanting to address Gukurahundi issues. Dabengwa is a surviving victim having spent five years locked up in Chikurubi without charge. Generations in the two regions trust him. He is the shadow that keeps the communities together.
So if there are clever people in Tsvangirai’s camp, they would be well advised to put a tent outside Dabengwa’s office and negotiate a sound deal. It could be as simple as MDC-T and MDC contesting the House of Assembly with ZAPU filling the senate and councillors. Dabengwa, Tsvangirai and Prof Welshman Ncube being Presidential running mates would be ideal in the order of political seniority.
If this was to be, then overnight, the number of those intending to register to vote would increase and the election would an exciting contest. The MDC may be well advised that last time, a coalition could have delivered victory and this time, it must not be missed.
I am desperate to prove Professor Really wrong. As I remembered his ear to ear grin when he departed, I started blaming my country for exporting tobacco. As he peeped from the top of his professorial glasses, he had shouted his twitter name that I never got because I was distracted by the comedy in his mouth.