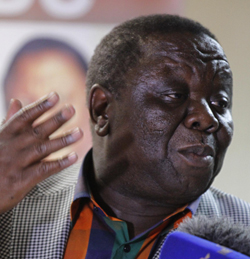 IS PRESIDENT Robert Mugabe required to issue the proclamation fixing the date of the next harmonised general election in consultation with Prime Morgan Tsvangirai — who must give his consent — in terms of Schedule 8 of the Constitution of Zimbabwe which defines the legal basis of the GPA government?
The answer is No. Absolutely not! There’s no legal requirement of that kind at all in Schedule 8 or any other part of the Constitution. This is notwithstanding widespread propaganda peddled by the MDC formations, their media mouthpieces, their NGO affiliates, their donor supporters who have wasted US$2,6 billion in their regime change agenda over the last four years and their so-called legal experts — who apparently have become more concerned with making money than making legal sense — who have each and all been falsely claiming that President Mugabe must in terms of Constitution of Zimbabwe Amendment (No. 19) Act, 2009, seek Tsvangirai’s consent before fixing the polling date of the forthcoming elections and the date of the sitting of the nomination court for those elections.
Section 20.1.3(q) of Schedule 8 of the Constitution clearly provides that “The President may, acting in consultation with the Prime Minister, dissolve Parliament”. It is very clear from this equally clear provision which has been seriously misunderstood that the reference in question is to “the dissolution” of Parliament and not to “the proclamation of an election date” or “the fixing of the date of the sitting of the nomination court” for that election.
One does not have to be a lawyer to see or understand the constitutional difference of night and day between a Presidential dissolution of Parliament on the one hand and a Presidential proclamation fixing the polling date and fixing the date of the sitting of the nomination court.
Yet and rather astonishingly, there have been self-indulgent and in fact misleading claims whose pathetic fallacy has been that President Mugabe has been seeking to dissolve Parliament without consulting Tsvangirai in alleged violation of Section 20.1.3(q) of Schedule 8 of the Constitution. For example — in his embarrassingly failed bid to be joined as a fourth respondent in the by-elections case that was won by President Mugabe last Friday — Tsvangirai falsely told the High Court under oath that “I take note that the applicant (President Mugabe) has indicated that he will dissolve Parliament and call for harmonised elections on or before or before the 29th June”.Advertisement