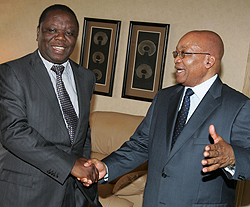 SINCE the crushing seven-to-two May 31 majority decision by the new-look Constitutional Court that President Mugabe should issue a proclamation fixing the date of the next harmonised general elections which should be held by 31 July, Morgan Tsvangirai and President Jacob Zuma’s SADC facilitation team of officials have become so dangerously desperate that they have shamelessly resorted to making seditious statements that are maliciously calculated to engineer a false crisis in Zimbabwe in order to harm the country’s national, constitutional and security interests by poisoning the forthcoming elections.
Consider the shocking evidence. Last week, Lindiwe Zulu, the frustrated and needlessly loquacious woman who has been doubling as the illegitimate spokesperson of President Zuma’s facilitation team, once again used the media to recklessly charge that Zuma’s facilitation team will insist on the so-called SADC election roadmap for Zimbabwe “with or without the court ruling”.
Her subversive message was that the recent judgment of the Constitutional Court is useless or irrelevant and that the so-called Sadc election roadmap which is a figment of her infertile imagination is more important than Zimbabwe’s sovereignty and its Constitution as interpreted by the Constitutional Court.
As if unaware of Lindiwe Zulu’s unacceptable insult to Zimbabwe’s laws and sovereignty and indeed the gross violation of the GPA by Zuma’s facilitation team, Tsvangirai jumped into the fray in criminal defence of the indefensible. He treacherously claimed that, “contrary to certain opinions I have seen in the media about sovereignty, we surrendered part of our sovereignty when we allowed South Africa to be the facilitator, when we allowed SADC and the AU to be the guarantors of managing this process”.

Without intending to make the point, but apparently informed by his subliminal knowledge of the dangerous and harmful role that the likes of Lindiwe Zulu are once again playing against Zimbabwe, Tsvangirai claimed that “we allowed South Africa to be the facilitator” and that we accordingly “surrendered part of our sovereignty”.

From Tsvangirai’s treacherous view, it is clear that when President Zuma’s facilitation team tramples on our sovereignty as it did during its totally unproductive visit to Harare last week, it does so under Tsvangirai’s mistaken notion that Zimbabwe has surrendered part of its sovereignty to South Africa some of whose officials — like deputy foreign minister Ebrahim Ebrahim — have been poking their stinking noses into our national affairs under the pretext of SADC mediation.Advertisement

Given Tsvangirai’s now well-established open zip, open mouth and shut mind reputation, it is not surprising that he does not know the simple fact that SADC’s facilitator in Zimbabwe is Jacob Zuma in his personal capacity and not South Africa or its embattled government. It is therefore ludicrous for Tsvangirai or anyone else to imagine, think, believe or claim that Zimbabwe surrendered part of its sovereignty to an individual called Jacob Zuma who happens to be the current president of the otherwise very fine Republic of South Africa.

It is a shame that Tsvangirai does not know that the GPA, about which Lindiwe Zulu and company are awfully ignorant, specifically makes clear the fact that foreigners like President Zuma and his SADC facilitation team and any other outsider have no right to interference in Zimbabwe’s national affairs. Article 9.1 of the GPA stipulates that “the (GPA) Parties reaffirm the principle of the United Nations Charter on non-interference in the internal affairs of member countries”. Furthermore and in terms of Article 9.2 of the GPA which has bold and robust provisions against external interference in Zimbabwe’s affairs the GPA parties agreed:

(a) that the responsibility of effecting change of government in Zimbabwe (which can only be done through elections) vests exclusively on and is the sole prerogative of the people of Zimbabwe through peaceful, democratic and constitutional means;

(b) to reject any unlawful, violent, undemocratic and unconstitutional means of changing governments; and

(c) that no outsiders have a right to call or campaign for regime change in Zimbabwe.

It is therefore a shameless falsehood manufactured by Tsvangirai’s open mouth and shut mind that Zimbabwe surrendered part of its sovereignty to South Africa or SADC or the AU or anyone else in terms of the GPA.  As a sellout, Tsvangirai may wish that Zimbabwe had surrendered its sovereignty to any foreign interest or that South Africa’s “bucket crisis of citizens without toilets” should spill into Zimbabwe but fortunately for Zimbabweans Tsvangirai’s stinking wish against his own country has no foundation or basis in the GPA and it certainly has no expression, no reason, no rhyme and no smell in the country’s constitution or laws.

As for Lindiwe Zulu’s reckless charge that Zuma’s facilitation team will insist on the so-called SADC election roadmap for Zimbabwe “with or without the court ruling”, the best that can be said about that rubbish is that it reminds everyone in and outside Zimbabwe of recent media revelations by the very honest Vice President of Zambia — Guy Scot — that President Zuma’s refrain to other SADC leaders has been to say “leave Zimbabwe to me”.

But surely it is insane for anyone to imagine that Zimbabwe can be left to President Zuma or to any individual or country or organisation or group of countries for that matter. Zimbabwe should be left to Zimbabweans.

That is the law and that is also the GPA position. Article 9 of the GPA recognises and affirms this fact by upholding the principle of the UN charter on non-interference in the internal affairs of member countries. Sadc and AU are bound by this UN principle.

Indeed, it is for this reason that when he addressed a Press conference after an extraordinary summit of SADC heads of state and government held on the sidelines of the 21st ordinary session of the AU following the 25 May celebrations, the executive secretary of Sadc, Tomaz Salamao, said elections in Zimbabwe “could not be postponed forever” and added that “our position as SADC is that the Constitution was concluded and the next step is the election. Whether it’s held within one month, two months, three months or the next six months, it is up to those with the powers to decide.”

And in what should consign into the dustbin of trash Lindiwe Zulu’s garbage that Zuma’s facilitation team will insist on the so-called SADC election roadmap for Zimbabwe “with or without the court ruling”, when SADC’s executive secretary — Tomaz Salamao — officially and publicly pronounced the position of the regional bloc he said, “we (SADC) are waiting to hear the ruling of the Supreme (Constitutional) Court, and as SADC we will be there to support . . . we are basically waiting for the announcement of the day of the election so that we move this process forward”. That is the official SADC position.

While the frustrated Lindiwe Zulu can talk as much nonsense as she wants in a hostile if not sponsored bid to assist Zimbabwe’s enemies; and while Tsvangirai can try to irresponsibly deal with his apparent fear of losing the impending elections by assisting Lindiwe Zulu’s treachery to advance the interests of his own documented sedition, the well-known fact which can be readily verified from the public record is that SADC, according to Salamao, “is basically waiting for the announcement of the day of the election so that we move this process forward”.

While everyone is now waiting for President Mugabe’s proclamation fixing the date of the forthcoming elections in compliance with the decision of the Constitutional Court and in accordance with the Constitution, Tsvangirai has been acting like a hooligan in defiance of the rule of law.

Saturday’s NewsDay newspaper quoted Tsvangirai pillorying the decision of the Constitutional Court by claiming that “contrary to other opinions that an Executive cannot function without Parliament, the Executive will continue to run government” while also revealing his ignorance by rhetorically asking “when Parliament is in recess, does the Executive cease to exist?”

Lost to Tsvangirai’s open mouth and shut mind is the fact that when Parliament is in recess — when it takes a break — that does not mean it doesn’t exist or that it is not there in the same way that when Tsvangirai went on recess or took a break with his open zip on a cruise with Nosipho Regina Shilubane, nobody said Tsvangirai had stopped existing because of his legendary recess in the seas.

After quarter to midnight on June 29, Parliament will not go on recess but it will come to an end in that it will legally stand dissolved by operation of the law.

Anyhow Justice Malaba goes on to cite Article 16.3 of the constitution of Ireland and points out that it provides that “after the dissolution of the Dail Eireann (parliament), a general election for members of parliament shall take place not later than 30 days after the dissolution”.

Other examples of countries that hold elections after dissolution cited by Justice Malaba include Bulgaria whose “Article 64.3 of the constitution provides that the date for an election shall fall within two months from the expiry of the life of Parliament” and Justice Malaba also says this applies “even in countries such as Canada where the date of a general election is fixed by legislation”.

But with all respect, it defies constitutional and legal logic to understand why at law Justice Malaba sees or finds any prudence in applying the electoral situation of constitutional democracies such as Zimbabwe with an elected President who is both head of state and government with that of parliamentary democracies such as Malaysia, Ireland and Canada where the head of state is ceremonial while the head of government with executive powers is a prime minister. Justice Malaba’s comparisons of the electoral and constitutional situation after the dissolution of parliament in Zimbabwe and countries like Malaysia, Ireland, Canada and even Bulgaria is patently like comparing oranges and apples. Yes, they are fruits but they are fruits that are very different from one another as to make nonsense of any mindless comparison between them.

But this is somewhat of a digression from Tsvangirai’s treachery and lawlessness in apparent cahoots with Lindiwe Zulu whose determination to harm Zimbabwe’s national and security interests is now public information. Speaking in Bulawayo last week, Tsvangirai said “if President Mugabe insisted on complying with the court order, the MDC-T would consider boycotting the election”. You will not find a more scandalous, lawless and treasonous position that can only be supported by President Zuma’s facilitation team whose penchant and support for illegality and lawlessness in Zimbabwe is now only matched by Tsvangirai and his MDC-T.

In a constitutional democracy, the supremacy of the constitution is fundamental and the final word on its interpretation only comes from the Constitutional Court. It is most unfortunate that with the active and public help and support of President Zuma’s facilitation team, Tsvangirai is openly challenging the rule of law in Zimbabwe by demanding that President Mugabe should not comply with the judgment of the Constitutional Court and that if he complies as expected and required of him in terms of the new Constitution and the rule of law, Tsvangirai and his MDC T will boycott the forthcoming elections with the apparent support of President Zuma’s facilitation team aimed at destabilising Zimbabwe.

While Tsvangirai and his MDC-T are fully entitled to their democratic and constitutional rights to decide whether to participate in the forthcoming elections or not, the self-evident and nefarious involvement of President Zuma’s facilitation team in Tsvangirai’s agenda to destabilise Zimbabwe against the rule of law in Zimbabwe is more than a cause for concern.

If Lindiwe Zulu cannot contain herself, and if indeed President Zuma’s facilitation team cannot contain Lindiwe Zulu or itself, then the time has come for the ANC to stand up and be counted and do something visible for a change as the oldest, respected and trusted liberation movement in our region, otherwise the consequences would be too ghastly to contemplate.