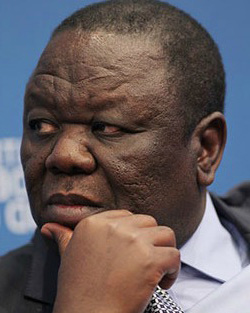 MORGAN Tsvangirai’s recent attack of the media is uncalled for as it is tantamount to muzzling the press. The country’s new constitution provides for expanded liberties, such as freedom of expression, which includes media freedom. The MDC-T and its entire leadership purport to uphold this tenet only when it suits them but, in reality, the opposite is true.
Recently, Tsvangirai attacked the media for doing their job on covering his personal life and the leadership renewal debate in his party. He is a public figure whose profile is understandably under a lot of public scrutiny, and the sooner he learns to live with that reality, the better for him.
The private media, for more than a decade, have been awash with Zanu PF succession and leadership renewal debate, and no media house has been cowed into avoiding public discourse on the issue because so doing would be a dereliction of duty on the part of the media. Now that the shoe is on the other foot, bedlam is let loose as the MDC-T wails loud and long while crying foul.
It is quite a fascinating paradox for Tsvangirai to criticize journalists for covering his personal life and leadership deficiencies whereas he wants to abuse the fourth estate, through press conferences, whenever his regime change rhetoric needs mileage.
Such an attack on media freedom exposes Tsvangirai’s despotic traits that would characterize the media landscape were he, and God forbid, to lead this country. It is now apparent that the media fraternity, and the community at large, is dealing with a very desperate, bigoted and dangerous coterie that, apart from lacking a common thread in terms of aspirations and ideology, cannot respond to ideas with ideas, but resorts to violence instead.
The level of violence in the MDC-T has reached alarming proportions to the extent that even those that profit from it, and they are plenty, are now alarmed at the prospect of being engulfed in it as the party totters on the brink of an imminent split. This could weaken the MDC-T and stifle its regrouping efforts. Tsvangirai’s efforts to gag the media are indicative of a leader with a lot of serious skeletons in his wardrobe and living in fear of their exposure.
This is not his first time that he has attacked journalists. Zimpapers, in general and Herald scribes in particular, have been perennial recipients of his diatribes. Their sins have been what he perceives as unfavourable or inadequate coverage, prompting Zimbabwe Union of Journalists (ZUJ) to slam the MDC-T leader for referring journalists working for the public media as “shallow minded”.Advertisement

Of late, Tsvangirai has also taken to vowing to deal sternly with anyone within the party who speaks to the press on party issues which is a veiled threat to those calling for his ouster, among them the party’s Deputy Treasurer-General Elton Mangoma, Secretary General Tendai Biti, National Youth Secretary General Promise Mkwananzi and Youth Chairman Solomon Madzore.
Unwittingly, Tsvangirai has cut off the umbilical cord of donors that have hither-to been erstwhile bedfellows by attempting to purge those who are calling for leadership renewal. The Americans and Europeans have threatened to break ties with Tsvangirai and form another regime change proxy should he insist on clinging onto power. The chickens are surely coming home to roost.
Even Botswana’s Ian Khama, has cast doubt and aspersion on Tsvangirai’s leadership qualities, fuming that the recent million Pula donation is being used to fund impunity by which Tsvangirai intends to consolidate power. From being a puppet of the West, Tsvangirai has become the laughing stock of all and sundry, especially the progressive minded on the continent. He has become the antithesis of democracy, a certified dictator who subscribes to the Machiavellian tenet that the means justify the end.