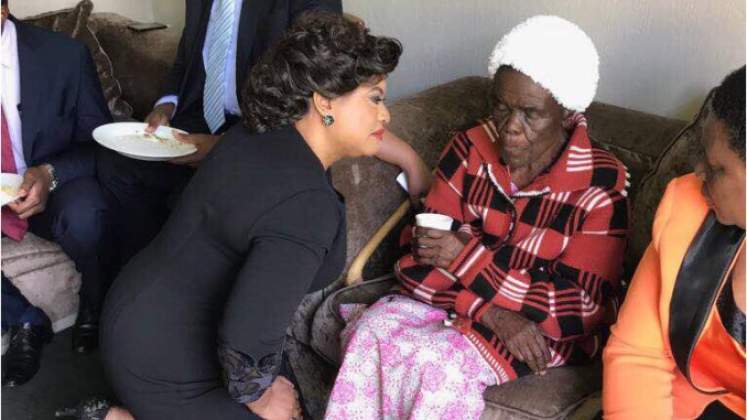 THERE was drama Saturday when Morgan Tsvangirai’s body arrived home as the late MDC-T leader’s mother threatened to commit suicide.

The incident occurred around 1800hours at One Commando Barracks where the body was to lie in state overnight.

Mbuya Tsvangirai was not happy with the presence of her late son’s wife Elizabeth and newly elected MDC-T leader Nelson Chamisa.

She threatened to commit suicide if the duo continued to participate in the proceedings.

“Tell your uncles that I do not want to see Elizabeth and Chamisa. I don’t even want to hear Chamisa’s speech,” Tsvangirai’s mother said in what seemed to be a message directed at of her children or grandchildren.

Chamisa and did not respond as family members tried to calm the former prime minister’s mother.

Although seemingly, not happy with Elizabeth, Mbuya Tsvangirai welcomed her son’s ex-wife Locardia Karimatsenga when she visited the family in South Africa to offer her condolences.

Now a church leader, Karimatsenga married Tsvangirai in November 2011 only for the MDC-T leader to just as quickly pull out of the relationship and marry Elizabeth instead.

The cause of Mbuya Ts

vangirai’s disquiet with Chamisa and Elizabeth has been the subject of much speculation.

The Tsvangirai family also reportedly blocked Chamisa and Elizabeth from visiting the former premier at the South Africa hospital where he eventually passed on.

Chamisa has drawn criticism for moving quickly to take over power as MDC-T leader just as Tsvangirai’s passing was announced in South Africa.

Meanwhile, Tsvangirai’s brother, Collins, revealed that the MDC-T leader had battled several other ailments in addition to cancer of the colon.

“I travelled to South Africa to be with him about six weeks ago; our mother and my sisters also joined me there,” said Collins, speaking at One Commando Barracks.

On Sunday, we had some hope because his face showed signs of glow. When we left the hospital that day at around 8 pm, we thought that he was going to get better.

“But on Monday and Tuesday, his health deteriorated rapidly. When I visited him in hospital on Wednesday, his body temperature was 34 degrees celsius. There was a lot that he was fighting.

“It was not just one disease, but many aliments. He had a problem with his heart, kidneys; and blood system was failing, and his legs were swollen. On the day that he died, we prayed vigorously with him as we asked for God’s help, but God chose his way.

“We thank Government for footing the bills and also giving us direct contact from the embassy in South Africa which was also very helpful. We constantly communicated with the authorities and they provided what we asked for.”