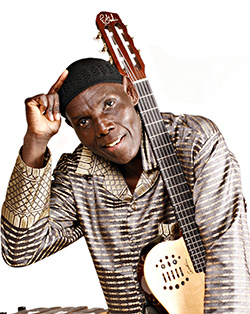 UK revellers will, at the end of this month, welcome Zimbabwe’s finest musicians Oliver Mtukudzi and Alick Macheso in great anticipation of the launch of the most talked about hot sizzling albums by the two giants.
East Midlands, the City of Leicester is the place to be on Saturday the 30th of July 2016 and music fans can’t wait, organisers have said.
The two artists will also be involved with a lot of humanitarian work. Mtukudzi is UNICEF Regional Goodwill Ambassador for Eastern and Southern Africa, focusing on young people’s development, and HIV and AIDS prevention while Alick Macheso is humanitarian ambassador for Red Cross.
Organisers say the artists are geared up to give UK fans some memorable performances, adding “they always have the energy, are full of life, and both coordinate well with their vocals, guitarists and backing vocalists.
“They have never disappointed and are always flawless.”
Mtukudzi has decided to launch his new album in Leicester, in front of his UK fans. The album is titled Ehe Nhai Yahwe and has 10 tracks.
A singer, songwriter and instrumentalist, Mtukudzi is a maverick in the folk music world. By turns, he picks his unmistakable acoustic guitar to accompany an ancient ballad, sings a witty song about modern life, plays a sweet African melody on guitar, swings a hot jazz number, and then reaches deep for a soulful expression of values in a troubled world.
He tops it all with a fiddle tune or Tozeza Baba, a family song, all skillfully blended into a seamless flow.
Last year when he was in the UK, one fan said; “Its music from the heart that hits you right between the eyes”.
It’s hard to imagine another artist on the folk scene who combines the same concise, deceptively understated, lyrical insight and sometimes devastating wit with such world-class instrumental prowess.
It’s not just a wealth of musical styles or his smooth and expressive voice that have made Watitsvata hit-maker such a fine artist.
His songs, which range from thoughtful, to the silly and the poetic, show that he knows his way around the Zimbabwean and African culture just as well as he knows his way around a fretboard.
Tuku. who will perform in Finland on Friday 29 July 2016 before his joint show with Macheso in Leicester on Saturday said; “It’s always a pleasure to perform with Alick Macheso who is currently on top of his game and UK fans are in for a great treat.Advertisement

“We will do what we always do – entertain them and we know most of these gigs are nostalgic to them. l will take them down memory lane and also play songs from my latest Album which I will be launching on the same night.
“The launch will also see the album released on the same weekend in Zimbabwe while its launch in Zim is expected later in the year. Tuku went on to add ‘’to my fans, our bond is beyond politics and unhealthy rhetoric. I appreciate every single one of you and God bless you.”