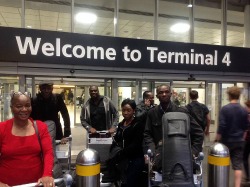 SUPERSTAR Oliver Mtukudzi and his Black Spirits band arrived Thursday in the UK where the legend is expected to stage two joint shows with South African songbird, Zahara.
Organisers said Zahara is expected in the UK Friday although her band landed the same day as Tuku.
Tuku and Zahara will stage joint shows in London and Birmingham on the Easter Weekend.
This would be the first ever time that Zahara will share a stage with Tuku in the UK.
The tour, promoted by the leading UK promoters Icons Of Africa, promises to be one of the biggest Southern Africa gigs in UK this year.
Zimbabweans, South Africans and other nationalities are expected to throng the venues to be wowed by Zahara & Tuku who have done memorable shows in Zimbabwe and South Africa before.
Both Tuku and Zahara are superstars in their own rights, known for wowing fans from all backgrounds with their scintillating tunes.
Tuku has been in the business for more than four decades.
Icons of Africa spokesman Ezra Tshisa Sibanda said this will be a, ” big big weekend for music fans”.Advertisement