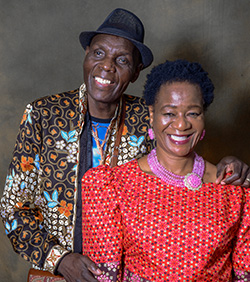 AFTER almost three years, Superstar Oliver Mtukudzi and his band The Black Spirits return to Calgary, Canada for a show on April 26.
The show comes hot on the heels of a Toronto gig he performed on April 18.
Part of the proceeds will be donated to Collin Nyabadza children’s charity Voice, with the specific task of identifying and assisting children of xenophobic victims.
The Calgary show is organised by NTM Global Promotions and supported by Association of Zimbabweans in Calgary and in conjunction Afrikadey.
In an interview, NTM Global Promotions’ spokesperson Joe Kundishora said Tuku was looking forward to his Calgary return.
“Tuku last performed in Calgary in 2012 so he is really looking forward to entertaining his fans on April 26, 2015 starting promptly at 6pm.
“This also happens to be the last show on his North American spring tour so his fans are invited for an intimate evening with the Legend at one of Calgary’s premier venues Flames Central,” he said.
The revered superstar recently performed at a sold out show in the UK alongside South African songstress Zahara.
Tuku then proceeded to the US where he had a series of gigs including the popular Zimexpo.
It is after the US show that he crossed the border into Toronto where his tour in Canada started.
Mtukudzi is arguably one of the best musicians from Zimbabwe and is counted among Africa’s Legends.
Meanwhile, Mtukudzi issued a statement on Zimbabwe’s independence condemning the xenophobic attacks in South Africa.
Below is the statement …
Oliver Mtukudzi Peace For Africa Messsage
OVER the last few days I have watched with horror on the news as xenophobic violence broke out in South Africa.
African turns on African as we forget the long journey we have travelled together against similar injustice and persecution from others who sought to subjugate us perpetually.
It is unthinkable that in this day and age, when Africa stands on the cusp of the long awaited realization of its greatness, that we can do this sort of thing to one another.
My heart and prayers go out to the people who have been affected, whatever country they are from.Advertisement

The borders we see today were drawn for us by others. I am urging all South Africans to stand up and say no to the hate of other Africans, No to violence and No murder.
In the same breath I am calling the leaders of Africa to speak out strongly against this madness.
We have always stood together as Africa, from the pre-independence days of our nations when we supported freedom fighters in their cause to more recently when we came together to fight Ebola.
Xenophobia is a scourge that we must get rid of once and for all. It must not be given a chance to manifest ever again.
In this light it is not enough to just condemn it, we need to map out a long term plan as a continent to make sure that what we are seeing in South Africa today, never happens again – anywhere in Africa.
Ndini wenyu
Mwana weAfrica
Samanyanga Oliver Mtukudzi
Oliver Mtukudzi – Hear Me Lord