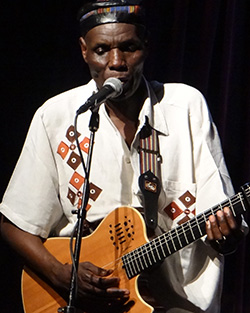 INIMITABLE music superstar Oliver Mtukudzi has been chosen to headline this year`s Gwanda Gospel festival.
The festival, which is fast becoming a permanent feature on the local showbiz calendar, is bank-rolled by South Africa-based but Gwanda-born businessman, Japhet Maphosa.
Now in its third year, the festival will be held between September 1 – 3 in the sleepy mining town with Tuku – as Mtukudzi is affectionately known – leading a line-up that includes the Mahendere Brothers, Zimpraise and Mbungo Stars.
Local gospel acts from Gwanda, Knowledge Nkiwane and Tholakele also make a return to the festival.
Prominent gospel artistes who have featured in previous editions include South Africa`s Queen of Gospel, Rebecca Malope, Hlengiwe Mhlaba, Dumi Mkokstad, Andile kaMajola and Mathias Mhere among others.
Bigtime Strategic Group, promoters of the event, are known to bring a world class show featuring top of the range equipment and large displays of fireworks.
Maphosa, in a statement, said the Tuku’s inclusion at this year’s edition is not a strange decision as the veteran musician is a gospel artist in his own right.

“Oliver Mtukudzi, in the song Hear Me Lord, which is part of the reason why we have billed him to perform as the headline act, shows that he is not only in that genre; he is indeed a Christian in his mind and in his heart,” said Maphosa.
“It comes across like that. And if you ask him, the way he explains it in that song, he says all of us go through trials and tribulations. And at that’s point you realise …this is a meeting (Gwanda Gospel Festival), an appointment with God.
“You understand that everybody, whether you are in mbira, rhumba, or whether you are in kwaito or whatever kind of genre, deep down in your heart it’s printed anybody needs God. And people need God much more when they hit trouble and we are saying let’s not wait for that time to need God when we hit trouble,” said Maphosa.
The big shot said he wants to turn Gwanda into an “altar” by continuing to hold the world class music festival in the mining town.
“Gwanda is an altar now. We want Gwanda to be the altar for the whole of Zimbabwe where the whole of Zimbabwe converges for free.Advertisement