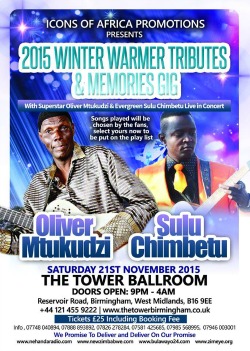 LEGEND Oliver Mtukudzi will yet again give his UK fans the respect they deserve as he returns for the 2015 winter show.
Dubbed the Winter Warmer Tributes and Memories gig, the show will be held this Saturday at the state of the art venue, Tower Ballroom in Birmingham.
Performing alongside him will be the son of another Zimbabwean legend, Sulu Chimbetu.
Sulu is the son of the late Simon Chimbetu.
He has made a name for himself in the music industry with songs and performances many can only attribute to the inspiration of the very soul of his father.
With such individual reputations, Tuku and Sulu’s coming together should surely be an occasion one cannot afford to miss.
According to organisers, the duo will be giving fans a chance to select their favourite tracks which they will perform on the night. To top this up fans, who make their selections, will be entered into a draw and given prizes live on stage!
“This promises to be thriller and a fitting start to another festive season. Let the festivities begin,” a statement from the show organisers said.
Superstar Tuku, as Mtukudzi is known, has been in the music business since the 1970s and has since released more than 50 albums.
His musical footprint has left an indelible mark not only in Zimbabwe but on the continent and the world as a whole.
“That is his true mark of genius-the ability to transcend tribal, racial and national boundaries. Tuku has indeed become part of our cultural heritage.
“His music and distinct sound became part of who we are as a nation as it accompanied us as the soundtrack to some of our best memories and comforted us in some of our worst moments,” organisers said.Advertisement