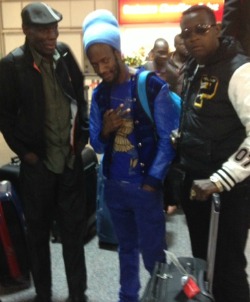 SUPERSTAR Oliver Mtukudzi flew into the UK Thursday along with Sungura star Suluman Chimbetu and Winky D for three joint weekend shows.
Promoters said the ‘Big-3-Tour’ will kick off in London on Friday, followed by dates in Leicester and the Yorkshire city of Leeds with all three artists set to feature live bands.
“Y2K Entertainment Promotions would like to reassure all those coming to the concert that everything is in place and that all the artists have landed in UK,” said Y2K Entertainment in a statement.
“All the advanced tickets have however, now sold out although fans can still buy them at the door. Patrons are encouraged to come on time so that they don’t miss out as the gigs kick off at 22:00 hrs sharp given that there are 3 artists to perform.
“We would like to say a big thank you to the overwhelming support we have received from UK fellow Promoters, DJs and other business acquaintances.  Come and enjoy the best of Zimbabwean music entertainment! Asipo haapo purezha haisi kumira!”
Mtukudzi returns to the UK after a sell-out tour of Canada and fans will be looking forward to his collaboration with Sulu on the hit song ‘Kwedu’ while “Ninja President” Winky D is also a huge local favourite and boasts a massive female following.
“I’m geared in full force and so as the Vigilance Band. Missing a tour of such magnitude is not an option; so come let’s make history. BAAANNNGGGG!” said Winky D.

Ninja President … Winky D with his Vigilance Band after arrival