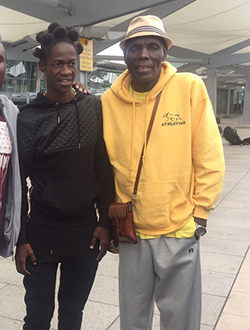 THE Zimbabwean superstar duo of Oliver ‘Tuku’ Mtukudzi and Jah Prayzah will headline the SAMA Festival which kicks off today (Saturday) in London and will run for the next three weeks.
The music fete will be held at The Royal Regency.
Also set to feature is emerging dancehall star Tocky Vibes, whose music has taken the country by storm, along with some Ugandan artists altough Dr Jose Chameleone has not made the trip due to visa problems.
“SAMA Festival UK kicks off in the capital city, London on Saturday (today) at the state of the art venue, The Royal Regency,” the organisers said in a statement.
“It will be graced by the Zimbabwean legend and ever-green Oliver Mtukudzi and the Black Spirits.
“Popularly known as Tuku, you can be rest assured that with his excellent stage choreography and his husky voice, the decibels will hit the roof in the house.
“Tuku is Tuku and as usual he will not disappoint and we have run out of accolades, enough said and respect due.”
The organisers added: “This year SAMA Festival UK will unleash a young talent whom the fans have been anxiously waiting for because he has been releasing hit after hit, tune after tune.
“We have also had to turn back the hands of time and dig deep into Y2K archives. We plucked out SAMA Festival UK 2007 and pull out Shingai Shoniwa & The Noisettes (then sitting at number 2 in British charts and rocking USA Billboard Charts) and Winky D.”
The festival which will be held over three weekends, moves to Leicester next Saturday with Jah Prayzah set to entertain the revellers.
“The revellers will converge at the majestic, spacious and imposing Maher Centre, Leicester.
“Oliver Mtukudzi and The Black Spirits, Jah Prayzah and The 3rd Generation, Tocky Vibes, Zivai Guveya and Heritage Survival and Kinnah will be in the house.
“With that line up Leicester will be on full throttle and in any case it usually provides a state of agitation and excitement, simply fever pitch,” the organisers said.
The Leicester gig will also see Jah Prayzah, Tocky Vibes and Kinnah unveil their new albums.
Jah Prayzah recently launched his new project, Jerusalema, at a glitzy event in Harare. Tocky Vibes while launch his new album, Toti Toti. Kinnah will also present his new project, Chakatyokera.Advertisement

The music festival will conclude in Coventry on June 28 with family show featuring Jah Prayzah, Tocky Vibes and Kinnah. The show will be held at The Sports Connexion.
Festival organisers also announced that they have unveiled an education sponsorship for two dancehall protégés, Spiderman and Ras Pompey.
“In view of supporting our talented youth we would like to give feedback that having successfully placed Spiderman and Ras Pompey at Borrowdale Brooke Academy, the boys are enjoying the benefits of excellent education and it is a big thank you to Mr Ian Henney for offering such education scholarship which is fully paid for the duration of their secondary education.”