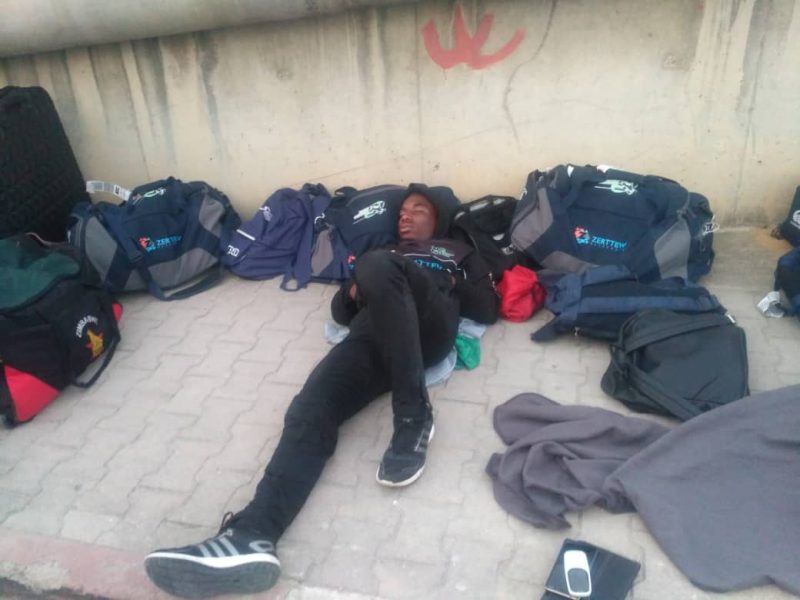 TUNIS: The Tunisian rugby federation on Wednesday criticised the Zimbabwean national team for unsportmanlike behaviour after they slept on the street in protest at the hotel in which they were put up.

Zimbabwe’s Sables are to play Tunisia on Saturday in Beja, 100 km (60 miles) west of Tunis, as part of qualifying for the 2019 Rugby World Cup in Japan.

On Tuesday former sports minister David Coltart said Zimbabwe’s players slept on the streets in Tunisia after being offered accommodation at a “disgusting” hotel.
Photographs showed players lying on a pavement wearing blankets and surrounded by their luggage.

“We are aware of an issue regarding the Zimbabwe team ahead of their Rugby Africa Gold Cup match on Saturday. We have received firm assurances from Rugby Africa that the issue has been quickly and effectively resolved,” the World Rugby tweeted.

In a joint statement, Rugby Africa and Tunisia Rugby Union said they “would like to express their sincere apologies to the Sables (Zimbabwe) team and management for this unfortunate situation … We would like to reassure the Zimbabwean Ministry of Sports, Zimbabwe Rugby Union and all partners and fans that the situation was addressed immediately, and an acceptable solution has been found. Tunisia Rugby Union took the Sables management to visit another hotel, which was accepted.”

Many in Zimbabwe, including former sports minister David Coltart, have accused Tunisian authorities of trying to unsettle the Sables ahead of Saturday’s match.
Tunisian rugby authorities hit back, accusing Zimbabwean sports authorities of unsportsmanlike behavior.

“The Tunisian rugby union strongly deplores the anti-sports and unethical actions of the Zimbabwean delegation,” the Tunisians said in a statement on Wednesday.

“The delegation of Zimbabwe started complaining as soon as they arrived” when the head of the delegation refused to pay the 20 euros per person for entry visas at Tunis airport.

The Tunisians said this resulted in a four-hour delay at the airport on Monday before the head of the delegation was eventually convinced by the chief of Rugby Africa to pay the fees.

After the Zimbabweans arrived at the hotel in the city of Beja, the delegation head “expressed reservations about the state of the bathroom in one of the rooms, the lack of a swimming pool and the low Internet speed,” the Tunisians said.

In protest, the head of the delegation then led the team outside to sleep on the street until dawn when they were transferred to a more prestigious hotel 40 kilometres away.

“The Tunisian Rugby Union expresses its deep regret for this unfortunate event and strongly deplores the anti-sports and unethical actions of the Zimbabwean delegation,” said the statement.

“It confirms through this press release that Tunisia is, and will always be, a country of hospitality, always proven and that will make its pride.”

Coached by South Africa’s Peter de Villiers, Zimbabwe lost last weekend to Kenya in Nairobi (45-36) and currently sit third of the six countries competing in qualifiers.
The Zimbabwean official who criticised Tunisia’s treatment of the Sables also hit out at the lack of funding for the team.

Its players will sleep in a two-star hotel next to the one the Zimbabweans complained about, said technical director Samir Ben Magtouf, who stressed there was no difference in the way they were being treated.

However, their hotel does get a few more favourable reviews online than the one the Zimbabweans slept outside of.

The Rugby Africa Gold Cup is the continent’s premier test rugby competition and the winner this year will automatically qualify for the World Cup in Japan next year.