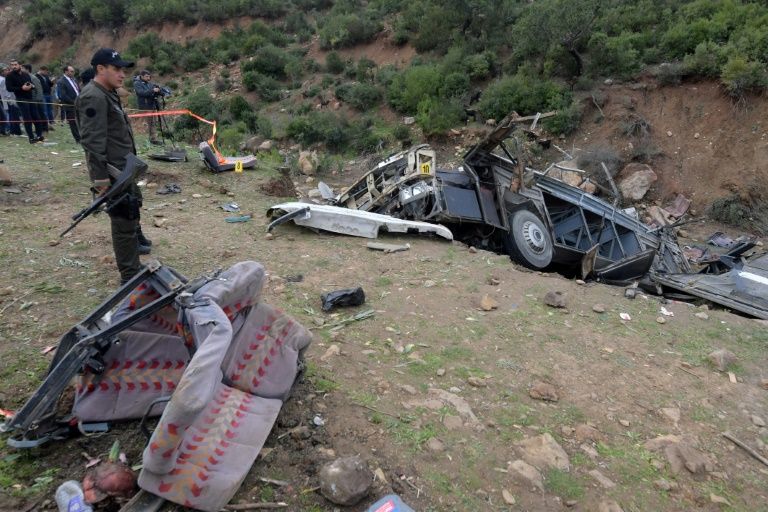 At least 24 Tunisians were killed and 18 more injured Sunday when a bus plunged off a cliff into a ravine in the country’s north, officials said.

The bus had set off from Tunis to the picturesque mountain town of Ain Draham, a popular autumn destination for Tunisians near the Algerian border, the tourism ministry said.

Twenty-four people were killed and 18 injured, the victims aged between 20 and 30, said the health ministry, releasing updated information on the tragedy.

Pictures and video footage shared online and posted on the websites of private radio stations showed the mangled remains of the bus with its seats scattered in the bed of a river.

Bodies, some in sports clothes and trainers, and personal belongings were strewn across the ground.

The bus with 43 people on board was travelling through the Ain Snoussi region when it plunged over the cliff, the interior ministry said.

The vehicle had “fallen into a ravine after crashing through an iron barrier,” it said on its Facebook page.

The injured were transferred to nearby hospitals, the interior ministry said.

Forensic experts were deployed to investigate the crash, said AFP correspondents at the scene.

It was not immediately clear what caused the accident but Tunisian roads are known to be notoriously dangerous and run-down.

Tourism Minister Rene Trabelsi told a private radio station Mosaique FM that the “unfortunate accident took place in a difficult area” and just after the bus had taken a “sharp bend”.

An civil defence official, speaking on state television, said there had previously been deadly accidents at the same spot.

Social network users bemoaned the tragedy, as Tunisian President Kaid Saied and Prime Minister Youssef Chahed arrived at the site of the accident.

“What a heavy toll,” one of them said.

Another denounced the “roads of death” in Tunisia and wrote: “24 dead and no one from the government has declared a national catastrophe”.

The World Health Organization in 2015 said Tunisia had the second worst traffic death rate per capita in North Africa, behind only war-torn Libya.

The authorities recognise the scale of the problem but have said the country’s security challenges, including jihadist attacks, have kept them from giving it more attention.